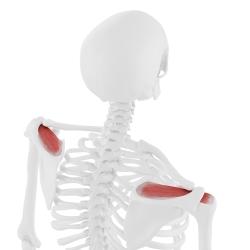 The supra-spinatus muscle (French: Muscle supra-épineux) is named from its position above the spine of the scapula. It is a somewhat fan-shaped, thick triangular sheet.

The upper facet of the greater tuberosity of the humerus ; and the capsular ligament of the shoulder joint.

It arises by fleshy fibres which converge upon a tendon which is concealed in the substance of the muscle almost to the point of its insertion.

From the brachial plexus (through the fifth cervical nerve) by the suprascapular branch which enters the muscle upon its deep aspect near its upper border.

Superficially, the trapezius, deltoid, and coraco- acromial ligament ; deeply, the omo-hyoid muscle and capsular ligament, the suprascapular vessels and nerve.

It occasionally receives part of the tendon of the pectoralis minor.