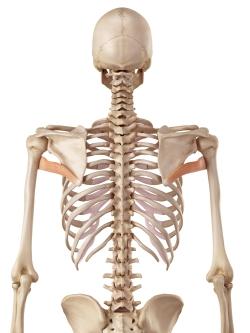 The teres major muscle (french : muscle grand rond)- named from its somewhat cylindrical shape and its size - is a thick ribbon-shaped muscle. 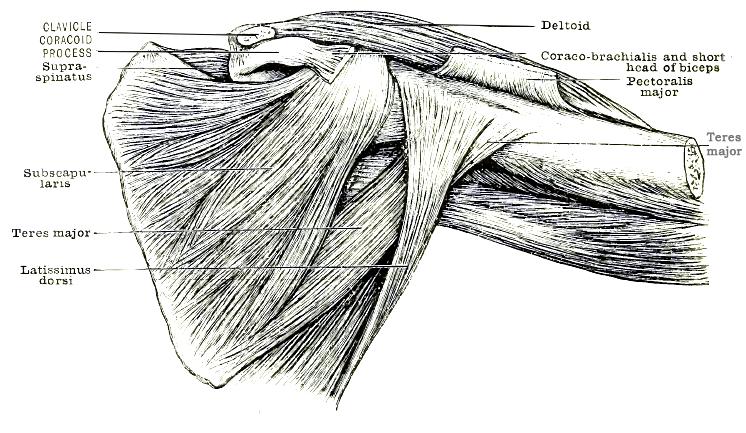 Front view of the scapula muscles.

The inner lip of the bicipital groove from the lower border of the lesser tuberosity for about two inches down the humerus.

Its origin is by fleshy fibres which pass upwards, outwards anc somewhat forwards, to be inserted by a strong tendon, which is first visible upon the outer border, and then upon the anterior surface of the muscle, and which is ii close relation with the back of the tendon of the latissimus dorsi. A small bursj intervenes between the two tendons.

From the posterior cord of the brachial plexus (through the sixth and seventh cervical nerves) by the lower subscapular nerve, which enters th(| muscle upon its anterior aspect close to the middle of its inner border.

It assists the latissimus dorsi as a strong adductor, and in some positions of the arm as an internal rotator of the humerus.

In front lie the latissimus dorsi, both heads of the biceps, the coraco-brachialis, the pectoralis major, the axillary vessels, and the lower branches of the brachial plexus ; behind, the latissimus dorsi, teres minor, infra-spinatus, the long and outer heads of the triceps muscle; between its upper border and the sub-scapularis muscle are the posterior circumflex and dorsalis scapulae vessels, and he circumflex nerve ; below are the superior profunda vessels and musculo-spiral nerve.