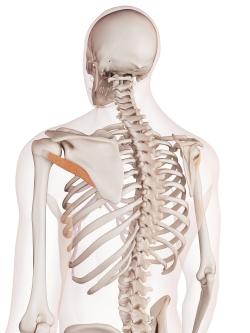 The teres minor muscle named from its being the lesser of two somewhat cylindrical muscles is a thick but narrow triangular or fan-shaped sheet.

The lower of the three facets of the greater tuberosity of the humerus and the posterior surface of that bone for one inch below the facet ; j(2) the capsule of the shoulder joint.

From a fleshy origin which terminates in a point below, its fibres diverge as they pass upwards and outwards to their insertion, which is by a short strong tendon into the lowest facet of the tuberosity, and the capsule of the shoulder 1 joint ; below the facet it is inserted by fleshy or very short tendinous fibres.

From the posterior cord of the brachial plexus (through the fifth cervical nerve) by the lower division of the circumflex nerve which enters the muscle upon its anterior surface near its insertion. The nerve is remarkable on account of the ganglion upon its trunk shortly before it passes into the muscle.

The same as that of the preceding muscle, of which it may be con- sidered to form a part. It will therefore rotate the arm outwards and at the same time adduct.

Behind, the deltoid ; in front, the long head of the triceps, the teres major, and subscapularis. Above and internally, the dorsalis scapulae vessels run between it and the axillary border of the scapula.