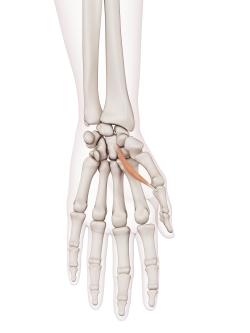 The outer and inner sides of the front of the base of the first phalanx of the thumb.

Arising by short tendinous as well as by fleshy fibres, the two heads become tendinous a short distance above the first metacarpo-phalangeal joint, and have imbedded in their substance sesamoid bones of a somewhat hemispherical shape, ad about one-sixth of an inch in diameter, which rest by small articular facets overed with cartilage upon the palmar aspect of the condyles of the first metacarpal one. Close to their insertion the tendinous fibres are blended with those of the bductor pollicis externally, and the adductor internally. In the inner head three iistinct divisions may generally be observed. The first or outermost division is a jmall fusiform slip which passes beneath the tendon of the flexor longus pollicis to i3in the outer head, and to be inserted into the radial sesamoid bone. The second 'Avision is fan-shaped, and its fibres, which form the greater part of the inner head, onverge to embra.ce the ulnar sesamoid bone. The third division lies under cover of the second. It is a small fleshy slip, which arises from the ulnar side of the base of the first metacarpal bone, and passes downwards to be inserted with the adductor pollicis into the ulnar side of the base of the first phalanx. Some authors describe this third division as the inner head of the flexor brevis pollicis, and the first and second divisions as the adductor pollicis obliquus.

The outer head is supplied (through the sixth cervical nerve) by the palmar branch of the median, which enters the middle of its anterior surface near its ulnar border. The inner head is supplied (through the eighth cervical nerve) by the deep branch of the ulnar nerve which enters the upper part of its deep surface close to its ulnar border.

Both heads will flex the metacarpo-phalangeal joint of the thumb. The outer head will flex also the carpo-metacarpal joint, while the inner head will be an adductor as well as flexor of this joint. The former will act in association with the abductor and opponens, and will draw the thumb forwards and inwards, keeping it at some distance from the palm of the hand. The latter will act with the adductor, and draw it more directly inwards in close proximity to the palm ol the hand.

The outer head lies beneath the abductor pollicis, and in contact by its radial border with the opponens pollicis. The inner head is partly separated from it by the tendon of the flexor longus pollicis ; upon its ulnar border it is m contact with the adductor. In front of it lie the tendons of the flexor profundus with the outer lumbricales ; behind, are the third part of the radial artery and th( interossei muscles of the first two spaces.

Muscles of the Thenar Eminence