Anatomic description of the biceps muscle 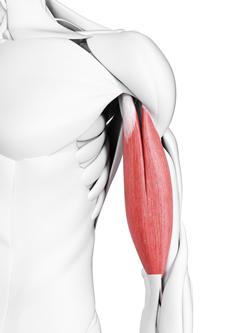 The biceps flexor cubiti (French: muscle biceps-brachial) - named from its two heads and its action - is a thick, somewhat flattened fusiform muscle with a bifid upper extremity.

The short head arises by a short tendon from which the fleshy fibers diverge in a somewhat conical form until they meet and blend with the outer and longer head about the middle of the upper arm.
The long head arises by a thick ribbon-like tendon three to four inches long, which at its origin upon the upper border of the glenoid fossa bifurcates and lends with the glenoid ligament of the shoulder joint. It first passes outwards ad arches over the rounded head of the humerus. It afterwards enters the canal formed by the bicipital groove internally, and externally by the capsule of the joint, together with the aponeurotic expansion derived from the tendon of the pectoralis major. Down to this point it is invested by synovial membrane, which is reflected upon it from the adjacent bone and capsule. After emerging at the lower end of le bicipital groove it gives origin to a conical mass of fleshy fibers, which meet with the fibers derived from the shorter head about the middle of the upper arm. The fleshy bundles belonging to the two heads may be separated for a considerable distance by careful dissection. Shortly below the middle of the upper arm, the tendon of insertion commences as a septum between the two bellies of the muscle. It rapidly increases in thickness, and about the level of the condyles it becomes gee, and as a flattened cord passes down in the middle of the bend of the elbow and turns upon itself so that its posterior aspect now becomes external; before its insertion into the posterior border of the tubercle of the radius it is separated from that process by a small synovial bursa. About an inch and a half from its insertion it gives off from its inner border a strong band of fibrous tissue three-quarters of an inch broad and one inch long (the semilunar fascia), to the deep fascia covering the ulnar surface of the forearm.

From the outer cord of the brachial plexus (through the sixth and seventh cervical nerves) by a branch of the external cutaneous nerve which enters the muscle on its posterior aspect near its inner border.

The origin of the biceps is remarkably variable. Sometimes one of the heads is deficient. More often a third head is derived from the middle of the inner border of the humerus, and sometimes as many as three additional heads have been found arising from the humerus. Occasionally it sends slips to the internal intermuscular septum, internal condyle, or coronoid process.

Muscles of the upper extremity