Union of tendons with muscles and neighbouring parts 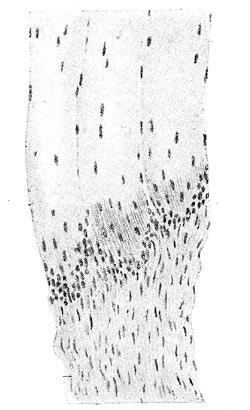 The tendon, whether long or short, cylindrical or flattened, joins by one of its extremities with the corresponding muscular body; by the other, it is inserted into various formations which, depending on the case, are a piece of bone, cartilage, fascia, etc., and is then inserted into the muscular body.

Union of the tendon with the muscle

The union of the muscle with its tendon is intimate.

It results from the following two factors:

1° continuity of the internal perimysium with the tendon bundles;

2° adhesion of the muscle fibres with the tendon.

Continuity of the internal perimysium with the tendon bundles

The conjunctive bundles of the internal perimysium, once they have reached the limit of the muscular body, pass into the tendon and continue there with the conjunctive bundles of the latter. The connective elements of the muscle and the connective elements of the tendon form a large whole and thus explain the intimate union of the two constituent parts of the muscle, its contractile part and its non-contractile or tendinous part.

Adhesion of muscle fibres to the tendon

Muscle fibres, as we have seen above, most often end in a conoid end, sometimes but more rarely in a rounded end, a bulging end, or multiple spikes.

Whatever its shape, this terminal end is housed in a depression or cup, which the tendon provides.

The tendon cup has exactly the same configuration, but in the opposite direction, as the muscle fibre it receives, so that the two formations correspond exactly at all points. However, there is no immediate contact between the contractile fibrils of the muscle fibre and the connective fibrils of the tendon. Between these two orders of elements there is myolemma, which, as we can see, is spread out in the following way 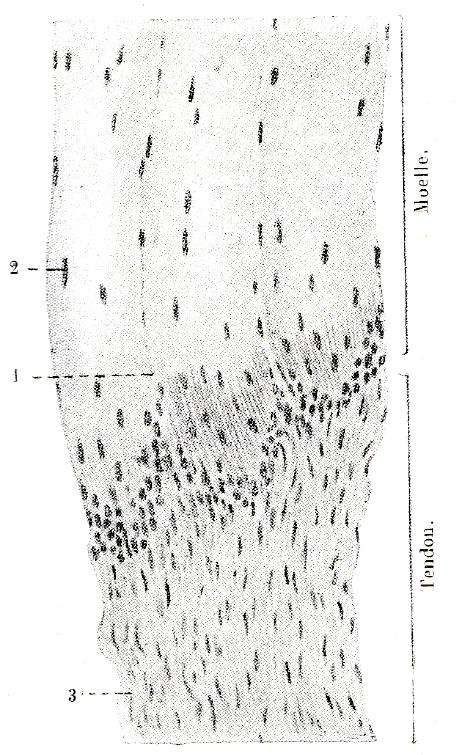 Longitudinal section of the gastrocnemius muscle of the frog showing the point of continuity of the contractile portion and the tendon (after Szymnovicz).

the figure, regularly and continuously covers the tendon cup. Through its concave side, the myolemma is weakly united to the muscle fibres. By its convex side, on the other hand, it adheres intimately to the cup: if, in fact, the muscle is subjected to the action of water at 55°, the contractile mass of the muscle fibre retracts and thus moves away from the myolemma to a greater or lesser extent, while the latter membrane remains in contact with the tendon cup indefinitely.

Insertion of the tendon on adjacent parts

Tendon insertion is most often done on skeletal, bony or cartilaginous parts. But it also takes place on fibrous formations: such are the straight muscles of the eye which, inserting themselves on the one hand on the fibrous sheath of the optic nerve, insert themselves on the other hand on the sclera; such are also the skin and aponeurotic tensor muscles, whose tendons end at the deep face of the dermis or on the aponeuroses. 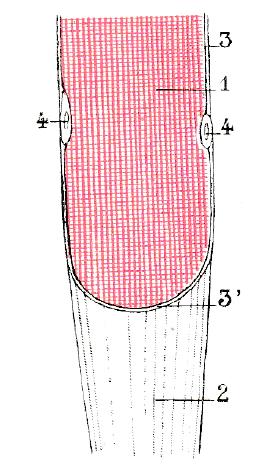 Union of the muscle fibres with the tendon (semi schematic).

1, contractile free muscle mass. - 2, tendon, hollowed out in a cup at the top. - 3, myolemma, with 3', the portion of this membrane lining the tendon cup - 4, 4, two cores, seen in profile along the edge of the muscle fibre.

As for the insertion of tendons on fibrous parts, this is done by gradual fusion of the tendon bundles with the fibrous or connective bundles.

According to Kölliker, cartilage cells are often found in the part of the tendons which is close to the bones, either isolated or in groups. The same histologist has also seen, but in cases which he regards as exceptional, tendon fibrils, near their insertion into the bone, encrusted with calcareous granulations. Insertion of the Achilles tendon in the calcaneus of a 60-year-old man (after Kölliker).