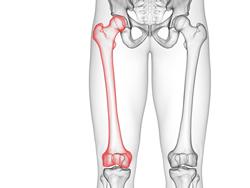 The superior extremity presents a neck, which is placed at an obtuse angle (in the female the angle approaches a right angle) to the axis of the bone and is surmounted by the head. This forms more than a hemisphere representing from two thirds to three-fourths of a sphere, and is directed inward and upward.

It is covered with cartilage with the exception of a rough and slightly depressed area somewhat below and to the inner side of the middle to which is firmly attached a peculiar ligament of the hip-joint, the ligamentum teres.

That portion of the bone which forms a constriction immediately below the head and which broadens externally toward the shaft is designated as the neck of the femur and is shaped like an obliquely truncated cylinder, the superior border being about twice as long as the inferior one. The upper extremity of the bone, at the margin of the neck, presents two large, strong protuberances, the trochanters, which receive the attachment of numerous muscles.

The greater trochanter is considerably larger than the lesser one and is situated externally, forming the entire outer portion of the superior extremity of the femur. Its slightly curved apex projects above the femoral neck, and below its apex is situated the trochanteri

The intertrochanteric line and ridge form the posterior boundary of the neck of the femur. The greater and lesser trochanters give insertion to a large number of muscles.

The shaft is almost cylindrical, although toward its lower extremity it becomes broader and assumes the shape of a three-sided prism with rounded margins. Its anterior and lateral surfaces are strikingly smooth, but the posterior surface presents a rough line, the linea aspera, which is composed of two distinct lips, an inner and outer lip. In the middle of the femur they are closely approximated, but diverge toward both the upper and the lower extremity of the bone, passing toward the trochanters above and to the epicondyles below.

The outer lip of the linea aspera passes upward to a long broad elevation, the gluteal tuberosity (sometimes the gluteal tuberosity develops into a more pronounced projection, the third trochanter), which is usually flat but markedly roughened, and receives the greater portion of the insertion of the glutaeus maximus muscle. The internal lip becomes less distinct as it passes upward and is continuous with the intertrochanteric line. Parallel to the upper part of the inner lip and somewhat to the outer side of it is situated a second rough line, the pectineal line, for the insertion of the pectineus muscle.

Toward the lower extremity of the femur the two lips of the linea aspera gradually diverge and form the boundaries of an almost plane triangular area upon the posterior surface of the bone, the popliteal surface. Upon the line, above its middle, there are usually one or more nutrient foramina which lead into canals pursuing a distinct upward (proximal) direction.

The shaft of the femur exhibits a distinct curvature, which is convex anteriorly, and upon its anterior broad portion there may be distinguished an antero-internal, an antero-external, and a posterior surface. The linea aspera furnishes either the origin or the insertion for a large number of muscles.

The inferior extremity of the femur is very broad, and presents two convex condyles, a larger internal condyle and a smaller external condyle, which are directed posteriorly and are separated from each other by the intercondyloid fossa, an intercondyloid line separating this fossa from the popliteal surface. Anteriorly the cartilaginous surfaces of both condyles are continuous with an articular surface, the patellar surface, which is concave from side to side and convex from above downward, so that the entire articular surface of the lower end of the femur is shaped somewhat like a horseshoe. Above the condyles upon the lateral surfaces of the lower end of the bone are situated two rough and slightly prominent processes, the epicondyles, which are termed the internal epicondyle and the external epicondyle. The lower portions of the lips of the linea aspera run downward to the epicondyles, which give origin to the gastronemius muscle.

Although the center for the lesser trochanter appears later than any of the other epiphyseal centers, it is the first to unite with the shaft of the femur.