The posterior primary divisions of all the thoracic nerves divide into medial and lateral branches while in the vertebral groove.

The medial branches of the upper six thoracic nerves pass dorsalward between the semispinalis dorsi and the multifidus spinje; they supply the spinalis dorsi, the semispinalis dorsi, the multifidus spinse, the rotatores spinse, the intertransversales, and the interspinales muscles; and they end in cutaneous branches which, after piercing the trapezius, turn lateralward in the superficial fascia of the back, and supply the skin as far as the middle of the scapula. The cutaneous branch of the second nerve is the largest; it can be traced lateralward as far as the acromion process. The medial branches of the lower six thoracic nerves run dorsalward, between the longissimus dorsi and the multifidus spinae; they chiefly end in twigs to the adjacent muscles, but not uncommonly they give small cutaneous twigs which pierce the latissimus dorsi and the trapezius and end in the skin near the mid-line of the back. 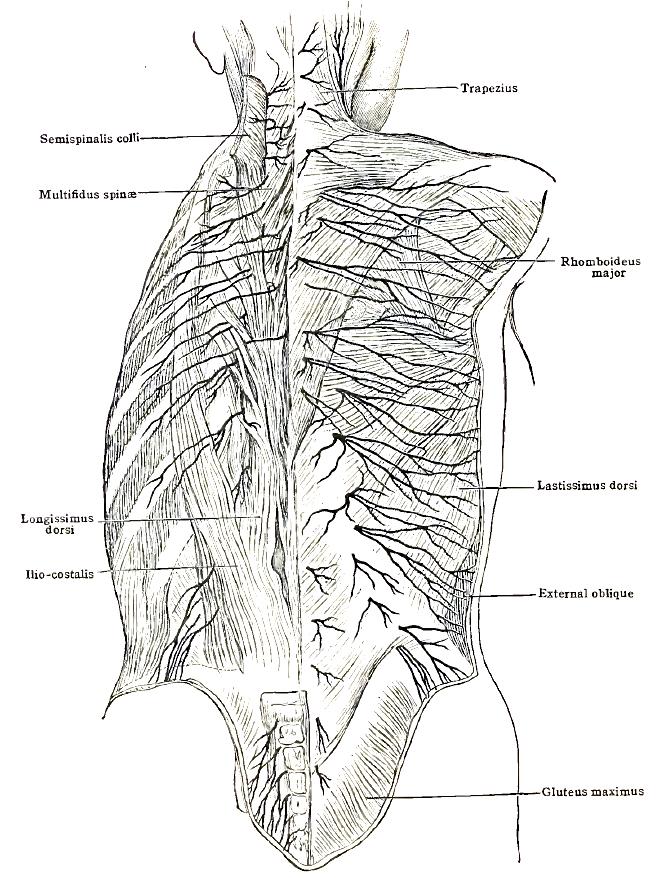 Distribution of the posterior primary divisions of the spinal nerves. (Henle.)