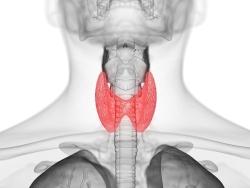 The thyroid gland has only topographic relations to the organs of the respiratory tract; in other respects it belongs to the ductless glands (glands with internal secretions). It is situated in the neck in front of the trachea and the lateral portions of the larynx, and is also partly in contact with the lateral wall of the laryngopharynx. Its middle portion is covered by the superficial layer of the deep cervical fascia, and laterally it is immediately beneath the sternothyreoidei, which lie upon the gland, the remaining infrahyoid muscles, the inner margin of the sternocleidomastoideus, and the platysma.

The gland has a yellowish-red color and a rather smooth surface; it is shaped like a horse-shoe and is of moderately firm consistence. It is a single structure, consisting of a narrow middle portion or isthmus and of two lateral lobes. Its size is subject to great individual variations and it frequently attains considerable dimensions as a goiter.

The isthmus is a markedly flattened cylindrical body situated in front of the upper three or four tracheal rings, although when markedly developed it may also lie in front of the cricotracheal membrane and the arch of the cricoid cartilage; it is connected to these structures by loose connective tissue. Corresponding to the shape of the trachea, the isthmus of the gland is convex anteriorly and concave posteriorly. A single elongated and pointed lobe not infrequently proceeds upward from the isthmus and is known as the pyramidal lobe; it is situated in front of the thyroid cartilage, in the median line or to one side (usually to the left) of it, and extends upward as far as the body of the hyoid bone. In this situation flat fasciculi of non-striated muscle fibers occur which connect the isthmus with the thyroid cartilage or the hyoid bone and are known as the levator glandulae thyreoideae.

The lateral lobes of the thyroid gland extend upward and backward; they lie upon the lateral portions of the lamina of the thyroid cartilage and their margins extend to the lateral pharyngeal walls. They are more voluminous and thicker than the isthmus; and their height is about twice their breadth; they are irregularly ellipsoidal in shape, their lateral surfaces being markedly convex and their internal ones somewhat flattened.

The thyroid gland is surrounded by a fibrous capsule which is also attached to the tracheal skeleton (suspensor ligaments of the thyroid gland), and within this capsule the individual lobules of the gland are separated from each other by fasciculi of connective tissue. According to their degree of distention with their secretion of colloid material they appear upon cross-section as vesicles of varying size.

One or two pairs of small accessory thyroid glands (parathyroids) occur on the posterior surface of the lobes, and the isthmus, or still more often the pyramidal lobe, may appear as an accessory gland, since the connections of either of these structures with the lateral lobes may be lost. Indeed, both of these portions of the gland are subject to great individual variation. In addition another pair of small accessory thyroids (parathyroids) occur rather constantly at the lower margins of the lateral lobes beside the inferior thyroid artery, and are about the size of a lentil. The median suprahyoid accessory thyroid, which is a single structure situated above the body of the hyoid bone, may be regarded as an incompletely developed pyramidal lobe.

The thyreoid gland receives four large arteries, the superior thyroids from the external carotids and the larger inferior thyroids from the subclavians. In rare instances they receive a fifth artery, the thyroidea ima. The superior thyroid veins pass to the internal jugular, and the inferior thyroid veins form the plexus thyroideus impar, which is situated at the lower margin of the gland and empties by means of the vena thyroidea ima and other vessels into the left innominate vein. The lymphatics of the thyroid gland are very numerous; some pass to the small lymphatic glands in the immediate vicinity, some to the inferior deep cervical lymphatic glands, and others (from the isthmus) empty into the anterior mediastinal glands.

The thyroid gland is developed from three rudiments, one single and two paired. The former arises as a diverticulum behind the tuberculum impar, and during the development of the tongue it gradually becomes constricted from its connection, so that the original excretory duct, the ductus thyreoglossus, is obliterated up to the foramen caecum and the lingual duct. This median forerunner of the thyroid gives rise to the isthmus and lobes of the gland and is joined by paired lateral diverticula from the epithelium of the fourth pair of pharyngeal pouches which form the parathyroids, the lower parathyroids being formed from similar diverticula from the third pair of pouches.