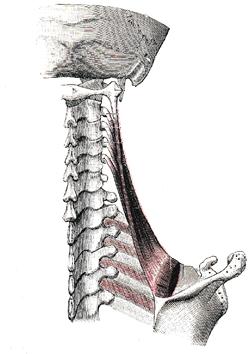 By four short tendons from the posterior tubercles of the transverse recesses of the four upper cervical vertebrae. 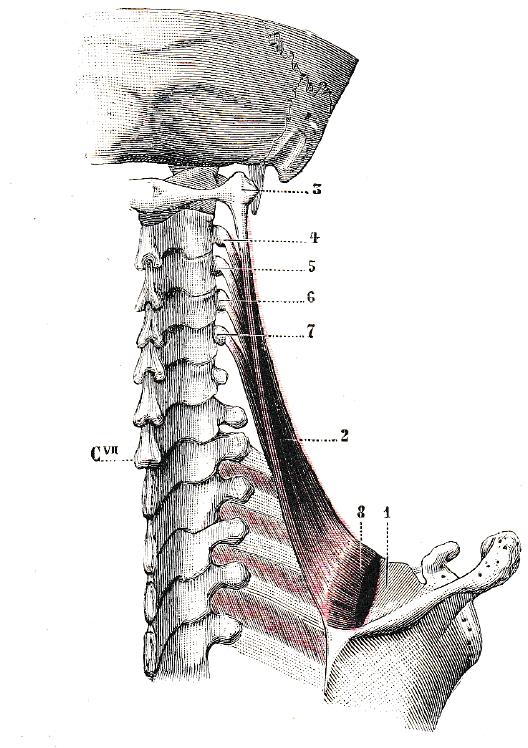 The vertebral border of the scapula opposite the supraspinous fossa.

The tendons of origin, which are closely connected with the insertion of the Splenius cervicis (Splenius colli), after a short course are succeeded by muscular bellies, and these unite to form a thick band of parallel fibers which remain fleshy to their insertion. The plane of the muscle changes as it descends. Above, while lying in the posterior triangle of the neck, its surfaces look outwards and inwards ; below, they are directed backwards and forwards.

From the cervical plexus by branches from the third and fourth cervical nerve which enter the front of the outer surface near the origin of the levator scapula muscle.

It raises the posterior superior angle of the scapula ; but, by causing rotation of that bone, it depresses the point of the shoulder. Taking its fixed point from below, it is an extensor and lateral flexor of the neck.

Superficially, the deep cervical fascia, the platysma myoides, the sterno-mastoid, the trapezius, the scalenus medius, the internal jugular vein, the spinal accessory nerve, and some of the descending branches of the cervical plexus ; deeply, the Splenius cervicis (Splenius colli), the Iliocostalis cervicis (cervicalis ascendens), the serratus posterior superior (serratus posticus superior), the posterior scapular vessels.

The number of cervical vertebrae from which the muscle arises varies, and may even arise from the mastoid process or occipital bone. It may send slips to the Serratus anterior (Serratus magnus), the serratus posterior inferior (serratus posterior, serratus posticus major), and other adjacent muscles ; occasionally to the clavicle and first two ribs.