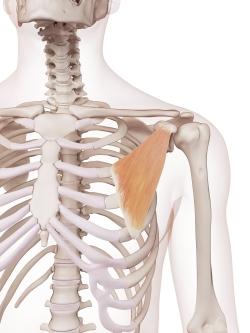 Its origin is by aponeurotic slips, which, after becoming fleshy, converge upwards, outwards, and somewhat backwards, upon the flattened tendon, which is attached chiefly to the coracoid process, but blends for an inch or more below that process with the origin of the coraco-brachial.

From the inner cord of the brachial plexus (through the eighth cervical nerve) by the internal anterior thoracic, which enters its deep surface learthe upper border, the nerve subsequently piercing the muscle to send filaments to the pectoralis major.

Its action is to draw downwards and forwards the scapula, depressing at the same time the point of the shoulder. Taking its fixed point from the coracoid process, it draws upwards and outwards the ribs to which it is attached, and also helps in forced inspiration. Its connection with the tendon of the coraco-brachial will enable it to act slightly as a flexor and adductor of the humerus.

Superficially, the pectoralis major ; deeply, the external intercostal muscles ; and, near its insertion, the axillary vessels and brachial nerves.

The origin may extend upwards as far as the second, or downwards to he sixth rib, and it may receive additions from the pectoralis major. It is occasionally altogether absent. Its insertion may be continued over the coracoid process to the capsule of the shoulder joint, the greater tuberosity of the humerus, or the clavicle.