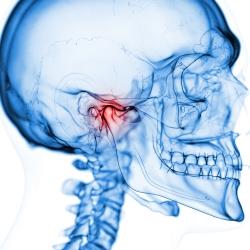 The mandibular articulation is a diarthrosis, more precisely a condylarthrosis.

The parts entering into the formation of the mandibular articulation are: the anterior portion of the mandibular fossa and glenoid ridge (eminentia articularis) of the temporal bone above, and the condyle of the lower jaw below. Both are covered with articular cartilage, which extends over the front of the glenoid ridge to facilitate the play of the interarticular cartilage.

The ligaments which unite the bones are:

The articular capsule is often described as consisting of four portions, anterior, posterior, lateral and medial, which are, however, continuous with one another around the articulation.

2. The posterior portion is attached above, just in front of the petro-tympanic {Glaserian) fissure, and is inserted into the back of the jaw just below its neck.

3. The lateral portion or temporo-mandibular (external lateral) ligament is the strongest part of the capsule. It is broader above, where it is attached to the lower edge of the zygoma in nearly its whole length, as well as to the tubercle at thu point where the two roots of the zygoma meet. It is inoUned downward and backward, to be inserted into the condyle and neck of the mandible laterally. Its fibres diminish in obliquity and strength from before backward, those coming from the tubercle being short and nearly vertical.

4. The medial portion (or short internal lateral ligament) consists of well-defined fibres, having a broad attachment, above to the lateral side of the spine of the sphenoid and medial edge of the mandibular fossa; and below, a narrow insertion to the medial side of the neck

of the condyle. Fatty and cellular tissue separate it from the spheno-mandibular ligament which is medial to it.

Its inferior surface is concave and fits on to the condyle of the lower jaw; while its superior surface is concavo-convex from before backward, and is in contact with the articular surface of the temporal bone. It divides the joint into two separate synovial cavities, but is occasion- ally perforated in the centre, and thus allows them to communicate. It is connected with the articular capsule at its circumference, and has some fibres of the exiernallpterygoid muscle inserted into its anterior margin.

There are usually two synovial membranes, the superior being the larger and looser, passing down from the margin of the articular surface above, to the upper surface of the articular disc below; the lower and smaller one passes from the articular disc above to the condyle of the jaw below, extending somewhat further down behind than in front. When the disc is perforated, the two sacs communicate.

The spheno-mandibular ligament (long internal lateral) is a thm, loose band, situated some little distance from the joint. It is attached above to the spine of the sphenoid and contiguous part of the temporal bone, and is inserted into the lingula of the lower jaw.

It covers the upper end of the mylo-hyoid groove, and is here pierced by the mylo-hyoid nerve. Its origin is a little medial to, and immediately behind, the origin of the medial por- tion of the capsule. It is separated from the joint and ramus of the jaw by the external â– ptery- goid muscle, the internal maxillary artery and vein, the inferior alveolar {dental) nerve and artery, the auriculo-temporal nerve, and the middle meningeal artery. It is really the fibrous remnant of a part of the mandibular (Meckelian) bar.

The stylo -mandibular ligament (stylo-maxillary) is a process of the deep cervical fascia extending from near the tip of the styloid proc- ess to the angle and posterior border of the ramus of the jaw, between the masseter and internal â– pterygoid muscles. It separates the parotid from the submaxillary gland, and gives origin to some fibres of the st^ylo-glossus muscle.

The arterial supply of the mandibular joint is derived from the'temporal, middle meningeal and ascending pharyngeal arteries, and from the latter by its branches to the Eustachian tube.

The nerves are derived from the masseteric and auriculo-temporal.

The chief movement of this joint is of (1) a ginglymoid or hinge character, accompanied by a slight gliding action, as in opening or shutting the mouth. In the opening movement the condyle turns like a hinge on the articular disc, while at the same time the ar- ticular disc, together with the condyle, glides forward so as to rise upon the eminentia articularis, reaching as far as the anterior edge of the eminence, which is coated with articular cartilage to receive it; but the condyle never reaches quite so far as the summit of the eminence. Should the condyle, however, by excessive movement (as in a convulsive yawn), glide over the summit, it slips into the zygomatic fossa, the mandible is dislocated, and the posterior portion of the capsule is torn. In the shutting movement the condyle revolves back again, and the articular disc glides back, carrying the condyle with it. This combination of the hinge and gUding motions gives a tearing as well as a cutting action to the incisor teeth, without any extra muscu- lar exertion.

There is (2) a horizontal gliding action in an antero-posterior direction, by which the lower teeth are thrust forward and drawn back again: this takes place almost entirely in the upper compartment, because of the closer connection of the articular disc with the condyle than with the squamosal bone, and also because of the insertion of the external pterygoid into both bone and cartilage. In these two sets of movements the joints of both sides are simultaneously and similarly engaged.

The third form of movement is called (iii) the oblique rotatory, and is that by which the grinding and chewing actions are performed. It consists in a rotation of the cond3'le about the vertical axis of its neck in the lower compartment, while the cartilage glides obUquely for- ward and inward on one side, and backward and inward on the other, upon the articular surface of the squamosal bones, each side acting alternately. If the symphysis be simply moved from the centre to one side and back again, and not from side to side as in grinding, the condyle of that side moves round the vertical axis of its neck, and the opposite condyle and cartilage ghde forward and inward upon the mandibular fossa. But in the ordinary grinding movement, one condyle advances and the other recedes, and then the first recedes while the other advances, slight rotation taking place in each joint meanwhile.

The chief relations are: Behind, and overlapping the lateral side, the parotid gland. Laterally, the superficial temporal artery. Medially, the internal maxillary artery and auriculo-temporal nerve. In front, the nerve to the masseter muscle.

Muscles acting on the joint

Retractors. - Posterior fibres of temporals, slightly by the int. pterygoids and deep layer of the masseters.

The articulations of the skull