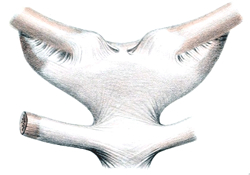 At this joint the large medial end of the clavicle is united to the superior angle of the manubrium sterni, the first costal cartilage also assisting to support the clavicle. It is the only joint between the upper extremity and the trunk, and takes part in all the movements of the upper limb. Looking at the bones, one would say that they were in no way adapted to articulate with one another, and yet they assist in constructing a joint of security, strength, and importance. The bones are nowhere in actual contact, being completely separated by an articular disc. The interval between the joints of the two sides varies from one inch to an inch and a half (2.5-4 cm.).

The ligaments of this joint are:

The articular capsule consists of fibers, having varying directions and being of various strength and thickness, which completely surround the articulation, and are firmly connected with the edges of the interarticular fibro- cartilage.

The fibers at the back of the joint, sometimes styled the posterior sterno-clavicular ligament, are stronger than those in front or below, and consist of two sets: a superficial, passing upward and laterally from the manubrium sterni, to the projecting posterior edge of the end of the clavicle, a few being prolonged onward upon the posterior surface of the bone. A deeper set of fibers, especially thick and numerous below the clavicle, connect the interarticular cartilage with the clavicle and with the sternum, but do not extend from one bone to the other. The fibers in front, the anterior sterno -clavicular ligament, are well marked, but laxer and less tough than the posterior, and are overlaid by the tendinous sternal origin of the sterno- mastoid, the fibers of which run parallel to those of the ligament. They extend obliquely up- ward and laterally from the margin of the sternal facet to the anterior surface of the clavicle some little distance from the articular margin. The fibers which cover in the joint below are short, woolly, and consist more of fibro-areolar tissue than true fibrous tissue; they extend from the upper border of the first costal cartilage to the lower border of the clavicle just lateral to the articular margin, and fill up the gap between it and the costo-clavicular ligament. The superior portion consists of short tough fibers passing from the sternum to the articular disc; and of others welding the fibro-cartilage to the upper edge of the clavicle, only a few of them passing from the clavicle direct to the sternum.

The interclavicular ligament is a strong, concave band, materially strengthening the superior portion of the capsule. It is nearly a quarter of an inch (6 mm.) deep with the concavity upward, its upper border tapering to a narrow, almost sharp edge. It is connected with the posterior superior angle of the sternal extremity of each clavicle, and with the fibers which weld the inter- articular cartilage to the clavicle; and then passes across from clavicle to clavicle along the posterior aspect of the upper border of the manubrium sterni. The lowest fibers are attached to the sternum, and join the posterior fibers of the capsule of each joint. In the middle line, between the ligament and the sternum, there is an aperture for the passage of a small artery and vein.

The costo-clavicular or rhomboid ligament is a strong dense band, composed of fine fibers massed together into a membranous structure. It extends from the upper (medial) border of the first costal cartilage (and rib), upward, backward, and distinctly laterally to the costal tuberosity on the under surface of the medial extremity of the clavicle, to which it is attached just lateral to the lower part of the capsule. Frequently some of the lateral fibers pass up- ward and medially behind the rest, and give the appearance of decussating. It is from half to three-quarters of an inch (1.5-2 cm.) broad.

The articular disc (fig. 285) is a flattened disc of nearly the same size and outline as the medial articular end of the clavicle, which it fairly accurately fits. It is attached above to the upper border of the posterior edge of the clavicle; and below to the cartilage of the first rib at its union with the sternum, where it assists in forming the socket for the clavicle. At its circumference, it is connected with the articular capsule, and this connection is very strong behind, and still stronger above, where it is blended with the interclavicular ligament.

It is usually thinnest below, where it is connected with the costal cartilage. It varies in thickness in different parts, sometimes being thinner in the center than at the circumference sometimes the reverse, and is occasionally perforated in the center. It divides the joint into two compartments.

Blood supply and nerves of the sterno-costo-clavicular articulation

The arterial supply is derived from branches

The nerve-supply is derived from the nerve to the subclavius and sternal descending branch of the cervical plexus.

Relations of the sterno-costo-clavicular articulation

In front of the joint is the sternal head of the sterno-mastoid. Behind it are the sterno-hyoid and sterno-thyreoid muscles. Still further back, on the right side, are the innominate and internal mammary arteries, and, on the left side, the left common carotid, the left subclavian, and the internal mammary arteries. Above and behind, between the sterno- mastoid and s terno-hyoid muscles, the anterior jugular vein passes back and laterally toward the posterior triangle.

The articular disc serves materially to bind the bones together, and to prevent the media and upward displacements of the clavicle. It also forms an elastic lauffer which tends to break shocks. The capsule, by being moderately tight, tends to limit movements in all directions, while the interclavicular ligament is a safeguard against upward displacement during depression of the arm. The costo-clavicular ligament prevents dislocation upward during elevation of the arm, and resists displacements backward.

Muscles which move the clavicle at the sterno-clavicular joint: