Customarily, the cranial nerves are described as comprising twelve pairs and each is referred to by number.

However, present knowledge of their origin, central connections and peripheral distribution suggests that those enumerated as the fifth, seventh, and eighth pairs under the old nomenclature are better each separated into its two component nerves, each of which merits a separate description and a separate name. None of the cranial nerves corresponds closely to a typical spinal nerve with its motor and sensory root. The so-called motor portion of the fifth is no more its motor root than is the seventh nerve. The sensory portion of the seventh is not wholly sensory and rather resembles the ninth pair in distribution, and it has long been commonly referred to as a separate nerve. The two parts of the eighth nerve, both sensory, are known to be wholly different in functional character and are so named. Further, the names of the nerves, descriptive of their function, are pedagogically much more eflacient than the use of numbers in referring to them.

Separating the three pairs mentioned, each into its two nerves, gives fifteen pairs instead of twelve. Their names and functional nature are given in the following table. The Roman numerals given in parentheses correspond to the serial numbers given when twelve pairs only are considered. It is also customary to enumerate the cranial nerves from in front backward and caudalward, and this custom is followed here, but again it would be pedagogically better to take them in the reverse order. Then each in its turn could be directly considered as in continuous series with the spinal nerves below and the similarities to and progressive modifications from the spinal type could be better realized. It will be remembered that somatic motor or efferent fibers are those which terminate directly upon the fibers of skeletal muscle while visceral motor fibers transfer their impulses to sympathetic neurones, and the axones of the latter terminate upon gland cells and upon the fibers of cardiac and smooth muscle.

The cranial nerves, like the spinal nerves, are developed from cells of the primitive neural tube and, beginning with the fifth pair downward, all the sensory nerves are developed from the cells corresponding to those of the ganglion crest which give origin to the spinal ganglia with the sensory components or dorsal roots of the spinal nerves. Otherwise between the cranial nerves and the spinal nerves there are many important differences. Each spinal nerve has a dorsal or sensory root, which springs from the cells of a spinal ganglion; a ventral or motor root, whose fibers are processes of the nerve-cells which are situated in the walls of the central system, and at their attachment to the surface of the cord the two roots are some distance apart. Only one of the (usually considered) twelve pairs of cranial nerves corresponds at all closely with typical spinal nerves. This one is the trigeminus which possesses a sensory ganglionated root and near its attachment is accompanied by a small motor nerve, the masticator, which serves in very small part as a corresponding motor root of the trigeminus. But even in this case where the similarity between the cranial and spinal nerves is greatest, there are still points of anatomical difference, which if not essential are very obvious, for the so-called motor root joins not the whole but only with one branch of the sensory portion. The two are only slightly separated from each other at their attachment to the surface of the brain. All the other cranial nerves differ in a still more marked manner from typical spinal nerves. The first nerve is an afferent nerve whose cells of origin (olfactory ganglion) are scattered in the mucous membraneof the nose, an organ of special sense, and its fibers are not collected together into a nerve-trunk, but pass, as a number of small bundles, through the lamina cribrosa of the ethmoid bone directly into the olfactory bulb. The optic nerve is also a nerve of special sense. Its fibers form a very distinct bundle, similar in appearance to an ordinary nerve, from which, however, it differs essentially, both with regard to structure and development; for, unlike an ordinary nerve, its connective tissue consists to a large extent of neurogha instead of ordinary connective tissue, and its component nerve-fibers are of much smaller calibre than those of an ordinary nerve. It represents the location of the original optic stalk, a diverticulum from the neural tube and it associates the retina (optic cup) , a bit of modified cortex, with the encephalon. The optic nerve, therefore, corresponds more closely with an association tract of the central system than with an ordinary nerve. 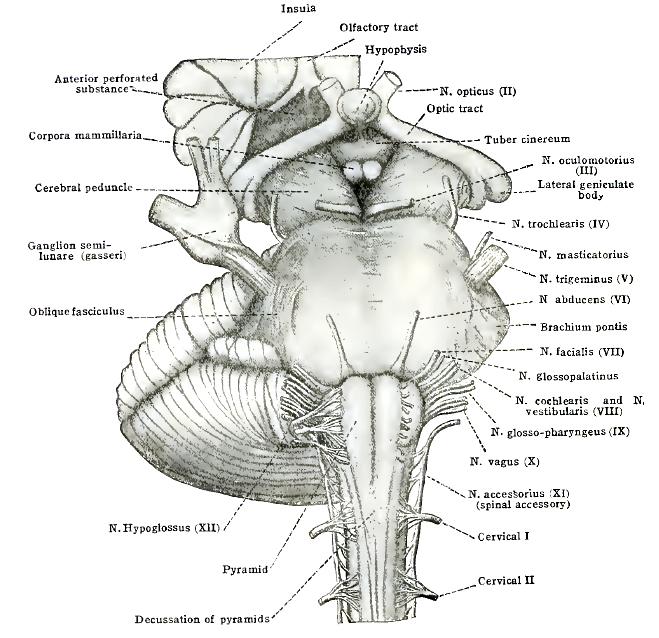 The oculomotor, trochlear, abducens and hypoglossal nerves are purely motor nerves, and thus correspond only with the ventral roots of spinal nerves. The spinal accessory is also purely motor. Its fibers arise from the cells of the anterior horn of the spinal cord and from a nucleus of the medulla which represents a displaced portion of that horn, but they do not leave the surface of the spinal cord and brain in the usual situation of ventral roots. On the contrary, they emerge in a series of rootlets from the lateral funiculus of the cord on the dorsal side of the ligamentum denticulatum, and from the upward prolongation of this funiculus.

The cochlear and vestibular are nerves of special sense, and in some respects both correspond closely with the dorsal root of a typical spinal nerve, and the ganglia of both represent spinal ganglia, but their distribution is limited to the membranous labyrinth.

The vagus and glosso-pharyngeal nerves contain both motor and sensory fibers, but they differ from typical spinal nerves in that the motor fibers, in company with the sensory, issue from the postero-lateral sulcus of the medulla, and they are intimately intermingled, from their origin, with the sensory fibers, which latter arise from ganglia interposed in the trunks of the nerves and otherwise correspond with the fibers of the dorsal root of a typical spinal nerve.

It is customary to speak of the area where the nerve-fibers leave or enter the brain substance as the superficial attachments of the cranial nerves, and the groups of cells from which the fibers spring, and about which they terminate, as their nuclei of origin or termination, respectively.