The facial or seventh nerve is purely motor. It is accompanied a short distance by a bundle usually called its sensory root or the intermediate nerve.

This latter, however, on the Ijasis of its origin, distribution, and mixed instead of sensory character, is described separately below as the glosso-palatine nerve. It is smaller than the facial, is fused to the trunk of the facial and the ganglion giving rise to its sensory fibers is situated upon the external genu of the facial.

The fibers of the facial nerve spring from a nucleus of cells situated laterally in the reticular formation at the level of the lower pons, dorsal to the superior olive, and between the root fibers of the abducens nerve and the laterally placed spinal tract of the trigeminus. From this nucleus the fibers of the nerve pass medially and dorsalward to the floor of the fourth ventricle and, just under the floor, they turn anteriorly, passing dorsal to the nucleus of the abducens. At the anterior end of this nucleus they turn sharply ventralward and lateralward, and at this point it is claimed that fibers descending in the near-by medial longitudinal fasciculus from the nucleus of the oculo-motor nerve of the same side become intermingled with the fibers of the facial nerve and pass outward with them. This, however, is uncertain. Continuing ventralward through the reticular formation the fibers of the facial emerge from the brain-stem at the inferior border of the pons, lateral to the superficial attachment of the abducens. At the point of its emergence, the facial nerve pierces the pia mater, from which it receives a sheath, and then proceeds forward and lateralward in the posterior fossa of the cranium to the internal auditory meatus, which it enters in company with the glosso-palatine nerve and with the cochlear and vestibular nerves. As it lies in the meatus it is situated above and in front of the latter nerves, from which it is separated by the glosso-palatine, and it is surrounded, together with these three nerves, by sheaths of both the arachnoid and the dura mater and by prolongations of the subarachnoid and sub-dural spaces. While it is still in the meatus it blends with the glosso-palatine and thus the combined trunk is formed. At the outer end of the meatus the trunk pierces the arachnoid and the dura mater and enters the facial canal (aqueduct of Fallopius), in which it runs forward and slightly lateralward to the hiatus Fallopii, where it makes an angular bend, the external genu [geniculum], around the anterior boundary of the vestibule of the inner ear; this bend is enlarged by the adhesion of the geniculate ganglion (of the glosso-palatine) upon its anterior border. From the geniculum the facial nerve runs backward in the facial canal along the lateral wall of the vestibule and the medial wall of the tympanum, above the fenestra vestibuli (ovalis), to the junction of the medial and posterior walls of the tympanic cavity; then, bending downward, it descends in the posterior wall to the stylo-mastoid foramen. As soon as it emerges from the stylo-mastoid foramen it turns forward around the lateral side of the base of the styloid process. 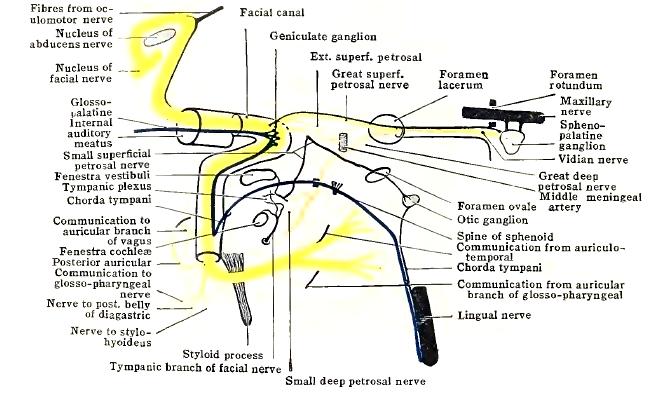 Diagram of the Facial (Yellow) and Glosso-palatine Nerve (Blue).

After it leaves the skull the facial nerve gives off two or three coll terai branches and its two terminal divisions, the temporo-facial and cervico-facial. The collateral branches are the posterior auricular nerve, a branch to the posterior belly of the digastric, and sometimes a lingual branch.

(1) The posterior auricular nerve is the first branch of the extracranial portion of the facial nerve. It passes between the parotid gland and the anterior border of the sterno-mastoid muscle and runs upward in the deep interval between the external auditory meatus and the mastoid process. In this situation it communicates with the auricular branch of the vagus. It supplies the auricularis posterior, sends a slender twig upward to the am-ioularis superior, and ends in a long slender branch, the occipital branch, which passes backward to supply the occipitalis muscle. It also receives filaments from the small occipital and great auricular nerves, and supplies the intrinsic muscles of the auricle (pinna).

(2) The nerve to the posterior belly of the digastric arises from the facial nerve close to the stylo-mastoid foramen and enters the muscle near its center, or sometimes near its origin. It usually gives off two branches: the nerve to the stylo-hyoid, which sometimes arises directly from the facial nerve and passes to the upper part of the muscle that it supplies, and the anastomotic branch, which joins the glosso-pharyngeal nerve below its petrous ganglion.

(3) The lingual branch, first described by CruveiUiier, is not commonly present. It arises a little below the nerve to the stylo-hyoideus and runs downward and medialward to the base of the tongue. In its course it passes to the medial sides of the stylo-glossus and stylo-pharyngeus, and runs downward along the anterior border of the latter muscle to the wall of the pharynx. It pierces the superior constrictor, insinuates itself between the tonsil and the anterior piUar of the fauces, and it is stated that it gives filaments to the base of the tongue and to the stylo-glossus and glosso-palatinus (palato-glossus) muscles.

In the substance of the parotid gland the two terminal divisions of the facial nerve he superficial to the external carotid artery and to the posterior facial (temporo-maxillary) vein. The way in which these terminal divisions give off their branches varies much in different subjects and often on the opposite sides of the same subject. One of the more common forms is here described. 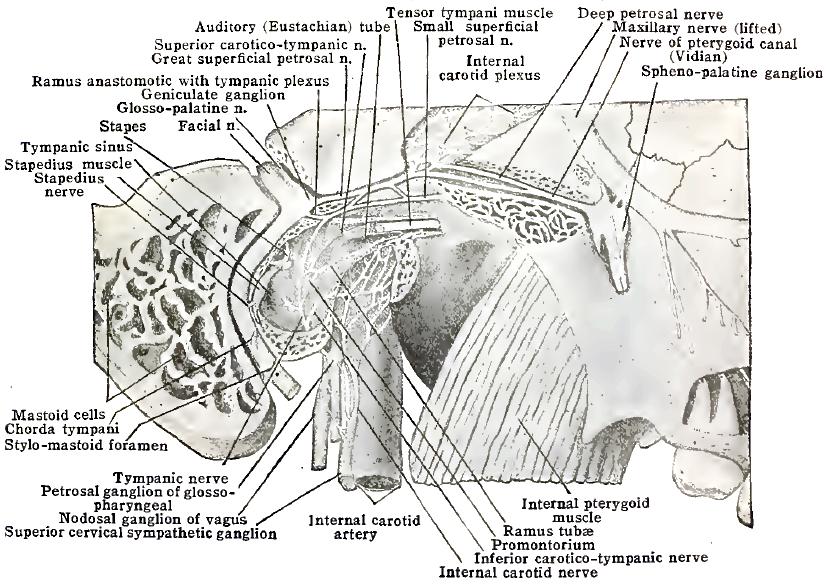 The Right Facial Nerve, within the Skull, and the Relations of the Glosso-palatine and Glosso-pharyngeal Nerves with the Tympanic and Internal Carotid Plexuses. (From Sobotta's Atlas, modified.)

The buccal (infra-orbital and buccal) branches arise sometimes from the lower terminal division and sometimes from both the upper and the lower terminal divisions. The buccal branches, passing forward upon the masseter and underneath the zygomaticus and quadratus labii superioris, interlace with the zygomatic and marginal mandibular (supra-mandibular) branches of the facial nerve, with the buccinator (long buccal) branch of the trigeminus, and with the terminal branches of the maxillary nerve, forming with the last-named nerve the infra-orbital plexus. They supply the zygomaticus, risorius, quadratus labii superioris, caninus, buccinator, inoisivi, orbicularis oris, triangularis, quadratus labii inferioris, and the muscles of the nose.

The marginal mandibular (supra-mandibular) branch, passing downward and forward under cover of the risorius and the depressors of the lower lip, commimicates with the buccal branches and with the ramus colli of the facial nerve, and with the mental branch of the mandibular nerve. It supplies the quadratus labii inferioris and mentalis.

The ramus colli (infra-mandibular branch) runs downward and forward under cover of the platysma, which muscle it innervates. Beneath the platysma it forms one or more communicating loops, near its commencement, with the great auricular nerve, and longer loops, lower down, with the superficial cervical nerve.

The nucleus of origin of the facial in the rhombencephalon includes an anterior and a posterior group of cells which give rise respectively to its upper and lower terminal divisions. They are associated with the somaesthetic area (lower third of the anterior central gyrus) by way of the pyramidal fasciculi of the opposite and same sides, and with the nuclei of the other cranial nerves, including the nucleus of termination of the glosso-palatine, by way of the reticular formation and the medial longitudinal fasciculus. 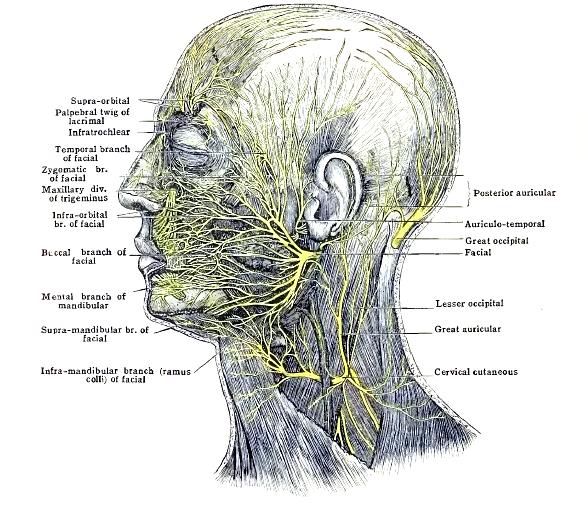 Superficial distribution of the Facial and other Nerves of the Head. (After Hirschfield and Leveillé.)