The hypoglossal nerves are exclusively motor; they supply the genio-hyoidei and the extrinsic and intrinsic muscles of the tongue except the glosso-palatini. They are usually designated as the twelfth pair of cranial nerves.

The fibers of each nerve issue from the cells of an elongated nucleus which lies in the floor of the central canal in the lower half of the medulla and in the floor of the fourth ventricle in the upper half beneath the trigonum hypoglossi. This nucleus is the upward continuation of the ventro-medial group of cells of the ventral horn of the spinal cord. From their origin the fibers run ventralward and somewhat lateral- ward, probably joined in the medulla by a few fibers from the nucleus ambiguus which is a segment of the upward prolongation of the lateral group of cells of the ventral horn. The conjoined fibers issue from the medulla in the sulcus between the pyramid and the olivary body, in a series of from ten to sixteen root filaments, which pierce the pia mater and unite with each other to form two bundles. These bundles pass forward and lateralward to the hypoglossal (anterior condyloid) foramen, where they pierce the arachnoid and dura mater. In the outer part of the foramen the two bundles unite to form the trunk of the nerve. At its commencement, at the base of the skull, the trunk of the hypoglossus lies on the medial side of the vagus, but as it descends in the neck it turns gradually around the dorsal and the lateral side of the latter nerve, lying between it and the internal jugular vein, and a little above the level of the hyoid bone it bends for- ward, and crosses lateral to the internal carotid artery, the root of origin of the occipital artery, the external carotid, and the loop formed by the first part of the lingual artery. After crossing the lingual artery it proceeds forward on the lateral svnface of the hyo-glossus, crossing to the medial side of the posterior belly of the digastric, and the stylo-hyoid muscles. It disappears in the anterior part of the submaxillary region between the mylo-hyoid and the hyo-glossus, and divides into its terminal branches between the latter muscle and the genio-glossus.

As it descends in the neck the trunk lies deeply between the internal jugular vein and the internal carotid artery under cover of the parotid gland, the styloid muscles, and the pos- terior beUy of the digastric, and it is crossed superficially by the posterior auricular and the occip- ital arteries. As it turns forward around the root of the occipital artery the sterno-mastoid branch of that vessel hooks downward across the nerve, and as it turns forward on the hyo-glossus muscle it lies immediately above the ranine vein. It is crossed by the posterior belly of the digastric and the stylo-hyoid muscle, and it is covered superficially, behind the mylo-hyoid, by the lower part of the submaxillary gland.

The hypoglossus is connected with the first cervical gan- glion of the sympathetic, with the ganglion nodosum of the vagus, with the loop between the first and second cervical nerves, and with the lingual nerve; the latter communication is established along the anterior border of the hyo-glossus muscle.

A meningeal branch, frequently represented by two filaments, is given off in the hypo- glossal (anterior condyloid) canal. It passes backward into the posterior fossa of the cranium and is distributed to the dura mater. It was believed at one time that the fibers of the meningeal branch were derived from the lingual nerve, but it is now deemed more probable that they are either sensory or visceral motor fibers from the cervical nerves, or from the vagus. 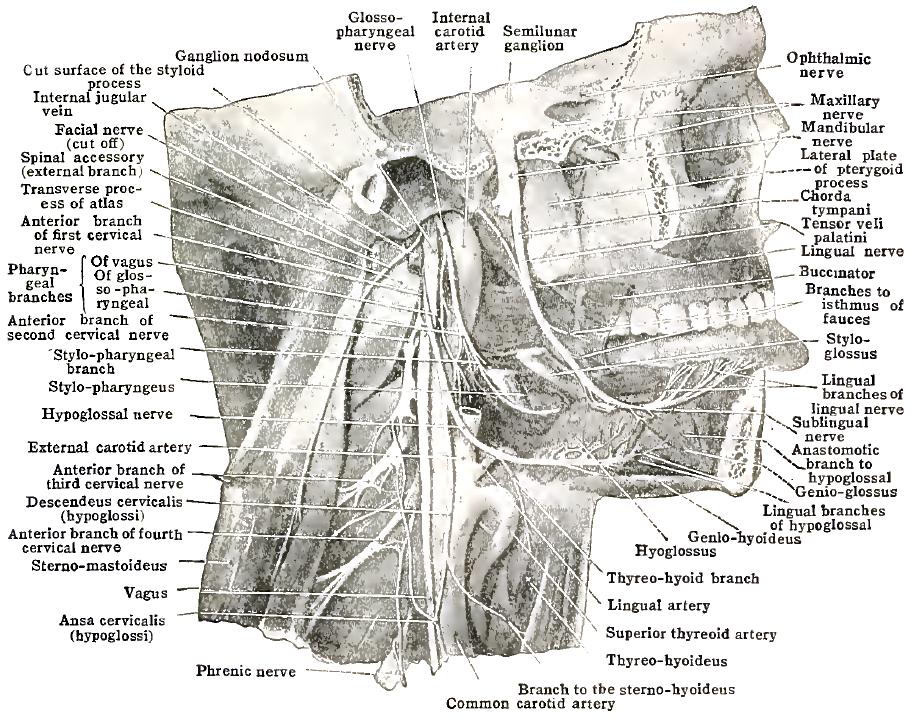 Branches which consist of fibers derived from the cervical plexus

The descendens cervicalis (hypoglossi) and the muscular twig to the thyi'eo-hyoid muscle, though apparently arising from the hypoglossal nerve, consists entirely of fibers which have passed into the hypo- glossal nerve from the loop between the first two cervical nerves. Therefore, neither of them are branches of the hypoglossus proper.

(a) The descendens cervicalis (hypoglossi) parts company with the hypoglossus at the point where the latter hooks around the occipital artery. It runs downward and slightly medialward on the sheath of the great vessels (occasionally within the sheath), and is joined at a variable level by branches from the second and third cervical nerves, forming with them a loop, the cervical loop [ansa hypoglossi]. The cervical loop rnay be placed at any level from a point immediately below the occipital artery to about four centinietres above the sternum. From this loop aU the muscles attached to the hyoid bone are supphed. A twig to the anterior belly of the omo-hyoid arises from the descendens cervicalis in the upper part of its course. The nerves which supply the sterno-hyoid, sterno-thyreoid, and posterior belly of the omo- hyoid are given off by the cervical loop. Twigs from the first two nerves pass downward in the muscles behind the manubrium sterni and â€¢in rare cases communicate with the phrenic nerve within the thorax. The nerve to the posterior belly of the omo-hyoid runs in a loop of the cervical fascia below the central tendon of the muscle.

(b) The nerve to the thyreo-hyoid leaves the hypoglossus near the tip of the great cornu of the hyoid bone, and runs obhquely downward and medialward to reach the muscle. All the fibers in (a) and (b) are derived from the first, second and third cervical nerves.

(c) The nerve to the genio-hyoid arises under cover of the mylo-hyoid, where loops are formed with the lingual nerve from which loops branches pass into the muscle. It probably contains some true hypoglossal fibers.

Branches of the hypoglossus proper

The nerve to the stylo-glossus is given off near the posterior border of the hyo-glossus. It pierces the stylo-glossus, and its fibers pursue a more or less recurrent course within the muscle.

The nerves to the hyo-glossus are several twigs which are supphed to the muscle as the hypoglossal nerve crosses it.

The nucleus of origin of the hypoglossus is associated with the som- Eesthetic area (operculum) of the cortex cerebri of the opposite side by the pyramidal fibers, and it is connected with the sensory nuclei (nuclei of termination) of other cranial nerves by way of the reticular formation and the medial longitudinal fasciculus.