The oculo-motor or third cranial nerve is a purely motor nerve. Each supplies seven muscles connected with the eye, two of which, the sphincter of the iris and cihary muscle, are within the ocular bulb.

The remaining five are in the orbi- tal cavity, and four of them - the superior, inferior, and medial recti and the inferior oblique - are attached to the bulb, while the fifth, the levator palpebrje superioris, is inserted into the upper eyelid.

The fibers of the oculo-motor nerve spring from their nucleus of origin situated in the grey substance of the floor of the cerebral aquteduct in the region of the superior quadrigeminate body. The cells of tliis nucleus are divided into two main groups, a superior and an inferior (fig. 663). The superior group includes two nuclei, a medial and a lateral. The latter, besides being lateral, is also somewhat dorsal to the former. The inferior group has been divided into five secondary nuclei, according to the eye-muscles the cells of each group innervate. Three of the five lie lateral to the others and somewhat dorsally, and of the remaining two, which are placed more medially, one encroaches upon the mid-line (nucleits mediaiis) and is continuous with the corresponding group of the opposite side and is common to the oculo-motor nerves of both sides.

It has been foimd, by the study of diseased conditions and by experiments with animals, that the centers of innervation of the eye-muscles suppUed by the nerve correspond to the above divisions of both the superior and inferior group of cells into a medial and lateral series. The relative position of the divisions of each group and the muscles they are thought to innervate are shown in the following diagram devised by Starr: 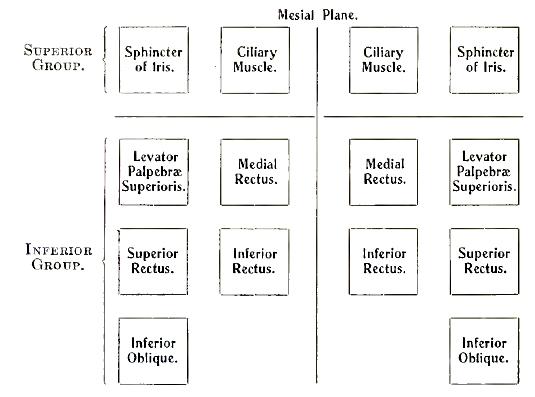 As they leave their nucleus of origin in the mid-brain, the fibers of the oculo- motor nerve form a series of fasciculi, which curve ventrally around and through the red nucleus and the medial part of the substantia nigra, to the oculo-motor sulcus on the medial surface of the cerebral peduncle, where they emerge in from six to fifteen small bundles which pierce the pia mater and collect into the trunk of the nerve. Immediately after its formation along the oculo-motor sulcus, the trunk of the nerve passes between the posterior cerebral and the superior cere- bellar arteries, and, running downward, forward, and laterally in the posterior part of the cisterna basalis, it crosses the anterior part of the attached border of the tentorium cerebelli at the side of the dorsum sellse, and, piercing the arachnoid and the inner layer of the dura mater, it enters the wall of the cavernous sinus about midway between the anterior and posterior clinoid processes. Immediately after its entry into the wall of the sinus it lies at a higher level than the trochlear nerve, but the latter soon crosses on its lateral side and gets above it, and directly afterward the oculo-motor nerve divides into a smaller superior and a larger inferior branch (fig. 734). Before its division communications join it from the cavernous plexus of the sympathetic about the internal carotid artery, and from the ophthalmic division of the trigeminus. Both branches proceed forward, and the nasal branch of the trigeminus, which has passed upward, on the lateral side of the inferior branch of the oculomotor lies between them. At the anterior end of the cavernous sinus the two branches pass through the superior orbital (sphe- noidal) fissure, between the heads of the lateral rectus muscle, and enter the or- bital cavity. In the orbit, the superior branch hes between the superior rectus and the optic nerve; it supplies the superior rectus and then turns round the medial border of that muscle and terminates in the levator palpebrse superioris. The inferior branch runs forward, beneath the optic nerve, and divides into three branches which supply the inferior and medial recti and the inferior oblique.

Some of the fibers which spring from the medial portion of the oculo-motor nucleus do not pass into the nerve of the same side, but into that of the opposite side, and it is beheved that they are distributed to the opposite medial rectus muscle. Other fibers which arise from the nucleus descend in the medial longitudinal fasciculus and either terminate about the cells of the nucleus of the facial or join the facial nerve, in which they pass to the upper part of the orbicularis palpebrarum. The eye is opened by the oculo-motor and closed by the facial nerve. Central connections. - The nucleus of the oculo-motor is associated with the middle portion of the anterior central gyrus, the posterior end of the middle frontal gyrus and with the cortex about the visual area of the occipital lobe of the opposite side of the brain by the pyramidal fibers. It is probably associated with the cerebellum by the fibers in the superior cerebellar peduncles, with the superior calliculus, and with the sensory nuclei of the other cranial nerves by the medial longitudinal fasciculus. To produce the coordinated activities of the eye-moving muscles, it must be associated with the nuclei of the trochlear and abducens.