The fibers of the optic nerve are the central processes of the ganglion cells of the retina. Within the ocular bulb they converge to the optic papilla, where they are accumulated into a rounded bundle, the optic nerve.

The nerve thus formed pierces the chorioid and the sclerotic coats, and, at the back of the bulb, enters the orbital fat, in which it passes backward and medialward to the optic foramen. After traversing the foramen it enters the middle fossa of the cranium, and anastomoses with its fellow from the opposite side, forming the optic chiasma. It may, therefore, for descriptive purposes, be divided into four portions: the intra-ocular, the intra-orbital, the intra-osseous, and the intra-cranial. The total length of the nerve varies from forty-five to fifty millimetres.

The intra-ocular part is rather less than one millimetre in length. It passes backward from the optic papilla through the chorioid and through the sclerotic coats of the bulb. As it passes through the latter coat of the bulb in many separate bundles, the area it traverses has a cribriform appearance when the nerve is removed, and consequently is known as the lamina cribrosa sclerce.

The intra-orbital part of the nerve emerges from the sclerotic about three millimetres below and to the median side of the posterior pole of the bulbus, and it is about thirty millimetres long. It passes backward and medialward, surrounded by the posterior part of the fascia bulbi (Tenon's capsule) and by the orbital fat, to the optic foramen.

As it runs backward in the orbit it is in relation above with the naso-ciliary (nasal) nerve and the ophthalmic artery which pass obliquely from behind and laterally, forward and medialward across the junction of its posterior and middle thirds, and also in relation with the superior ophthalmic vein, the superior rectus muscle, and the upper branch of the oculo-motor nerve. Below it are the inferior rectus muscle, and the inferior division of the oculo-motor nerve. To its lateral side, near the posterior part of the orbit, are the ophthalmic artery, the ciliary ganglion, the abducens nerve,, and the external rectus muscle. The anterior two-thirds of this portion of the optic nerve are surrounded by the ciliary arteries and the ciliary nerves and it is penetrated on its medial and lower aspect by the central artery of the retina. As it enters the optic foramen to become continuous with the intra-osseous part, it is in close relation with the ligaments of Lockwood and Zinn (annulus tendineus communis) and with the four recti muscles which arise from them.

The intra-osseous portion is from six to seven millimetres long. It lies between the roots of the small wing of the sphenoid and the body of that bone, and it is in relation below and laterally with the ophthalmic artery.

The intra-cranial portion, which is from ten to twelve millimetres long, runs backward and medialward, beneath the posterior end of the olfactory tract, and above the ophthalmic artery, the medial border of the internal carotid artery and the diaphragma sellse to the chiasma. From the chiasma to the central connections of the nerve, the path is known as the optic tract.

The central connections of the fibers of the optic nerve have been considered with the optic chiasma and the optic tract. 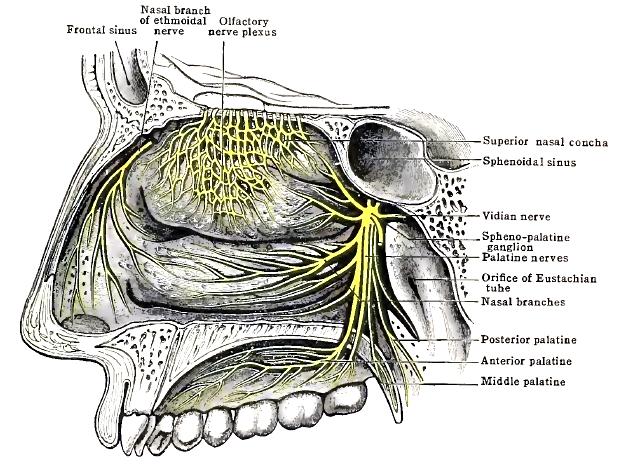 The sheaths of the optic nerve

The optic nerve receives a sheath from each of the membranes of the brain, and prolongations of the subdural and sub-arachnoid cavities also pass outward along it to the posterior part of the sclera.