The outer group is formed by the three scaleni, which pass from the first two s upwards and inwards to the transverse processes.

The scalenus anticus - named from its shape (scalenus = of unequal sides, being a term applied to certain triangles in geometry) and its relation to its fellows - a thick, triangular sheet.

The scalene tubercle near the inner border of the upper surface of the first rib.

The anterior tubercles of the third, fourth, fifth, and sixth cervical vertebrae.

Arising by a short, somewhat flattened tendon, which is continuing upwards for a short distance upon the front and outer surface of the muscle, the fleshy fibres diverge as they pass upwards and slightly backwards and inwards ' be inserted by four short tendons into the transverse processes.

From the anterior primary branches of the fourth, fifth, and sixth cervical nerves close to their points of emergence.

In front lie the sternomastoid, omohyoid, and subclavius, the internal jugular vein, the subclavian vein and pneumogastric nerve; on the inside are the rectus capitis anticus major, longus colli, and the sympathetic cord on the outer side and behind emerge the anterior primary branches of the cervical nerves separating it from the scalenus medius; and lower down it cross in front of the second part of the subclavian artery and the pleura.

The scalenus medius: — named from its shape and position — is an elongate triangular sheet.

The upper surface of the first rib between the tuberosity and the groove for the subclavian artery.

The front of the posterior tubercles of the six lower cervical vertebra and frequently also the lower part of the lateral mass of the atlas.

Arising by a broad band, tendinous in front and muscular behind the fleshy fibers form a thick sheet of slightly divergent fibers, which run upward and inwards to end upon the vertebrae in six short tendons.

The posterior primary branches of the cervical nerves as so as they emerge supply numerous filaments to the inner part of its anterior surface.

Acting from below, to flex the neck laterally; acting from above, raise the first rib as in forced inspiration, or to fix it in ordinary inspiration.

In front lie the sternomastoid, omohyoid, and trapezius, the subclavian artery, cervical and brachial plexuses; behind, it is in contact with the levator anguli scapulae and scalenus posticus.

The scalenus posticus — named from its form and position —  is a triangular shape.

The upper part of the outer surface of the second rib behind the rough prominence for the serratus magnus.

The lower surface of the posterior tubercles of the two or the lowest cervical vertebrae.

Arising partly directly from the bone, and partly by a short apo-neurosis which covers the outer and posterior part of the origin, its fleshy fibres converge and are inserted by three short tendons.

Small filaments which come from the lower three cervical nerves at their points of emergence, and, after passing through the scalenus medius, enter the front surface of the muscle.

When the rib is fixed, to flex the lower part of the neck laterally, and, acting from above, to raise the second rib, especially in forced inspiration.

In front lies the scalenus medius; behind, the levator anguli sapulae. 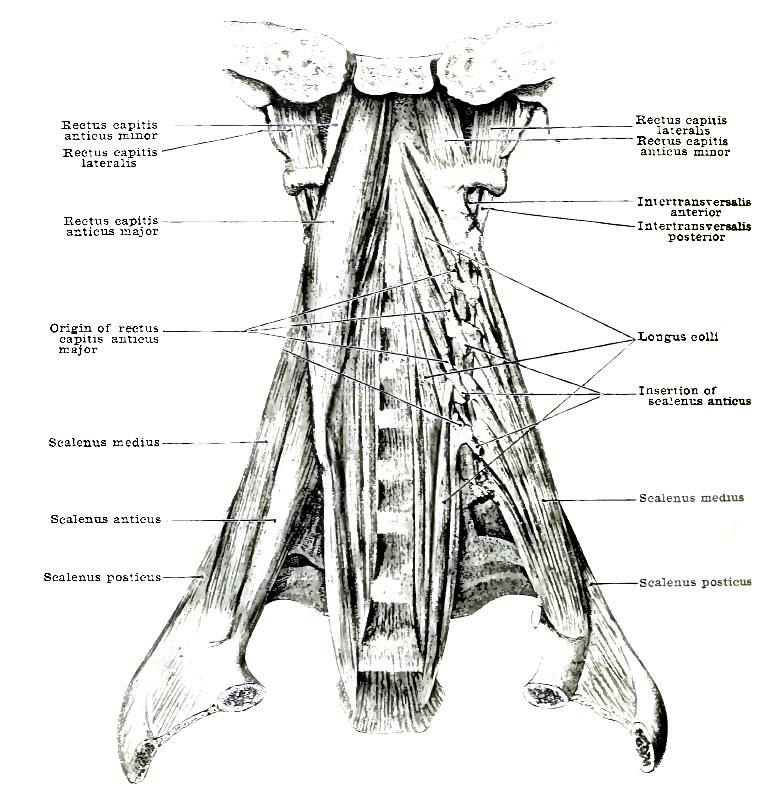 The deep muscles of the front of the neck