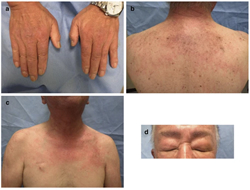 A 63-year-old man visited our hospital due to pollakiuria. High levels of PSA and NSE were observed, and prostate biopsy revealed an adenocarcinoma with neuroendocrine differentiation. Multiple metastases to the lymph nodes, bones, and liver were identified, and androgen deprivation therapy (ADT) was started immediately. Following 2 weeks of treatment, erythema on the skin, and muscle weakness with severe dysphagia appeared. The patient was diagnosed with dermatomyositis, and high-dose glucocorticoid therapy was initiated. ADT and subsequent chemotherapy with etoposide and cisplatin (EP) were performed for prostate cancer, which resulted in decreased PSA and NSE and reduction of all metastases. After the initiation of EP therapy, dermatomyositis improved, and the patient regained oral intake function. Although EP therapy was replaced by docetaxel, abiraterone, and enzalutamide because of adverse events, no cancer progression was consistently observed. Dermatomyositis worsened temporarily during the administration of abiraterone, but it improved upon switching from abiraterone to enzalutamide and dose escalation of glucocorticoid.

We successfully treated a rare case of dermatomyositis associated with prostate adenocarcinoma with neuroendocrine differentiation.