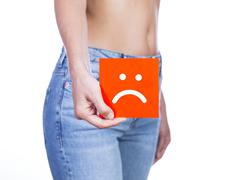 Many women frequently experience bacterial vaginosis, an infection producing several irritating symptoms that result from an excessive amount of bacteria in the vagina.
While certain bacteria are necessary to maintain optimal health of the vagina, these bacteria can be provoked by internal and/or external conditions into abnormally proliferating which causes a foul-smelling discharge.

Vaginal bacterial infections are not directly harmful to the vagina or to a woman's reproductive system, but it can be embarrassing if not treated in a timely manner.
However, any type of discharge is abnormal, especially if has a bad smell and should always be evaluated by a physician to determine whether it is something serious such as gonorrhea or Chlamydia.

Technically, a vaginal bacterial infection presents a condition in which the amount of lactobacilli meant to maintain normal levels of hydrogen peroxide in the vagina is reduced. At the same time this occurs, anaerobic bacteria, as well as other kinds of bacteria, breed uncontrollably in an environment which lacks oxygen.
Because so many bacteria types proliferate during a vaginal infection, doctors find it difficult to accurately diagnose and treat bacterial infections.

However, doctors can tell patients what may be inciting a vaginal bacterial infection in an attempt to narrow down possible causes.
These potential causes include:

Having multiple sexual partners, usually more than two or three within one year
Using intrauterine contraceptive devices, such as IUDs
Using strong antibiotics due to a medical condition
Excessive vaginal douching
Cigarette smoking

However, it is important to note that having several sexual partners in a short period of time has not been clinically proven to directly provoke a vaginal bacterial infection but may merely be conducive to abnormal bacterial growth.

Contrary to some beliefs about vaginal bacterial infections, women cannot receive this kind of infection from toilet seats, swimming pools, sleeping in someone else's bed or touching objects that may have been touched by someone with bacterial vaginosis.

Certain women seem to be prone to suffering repeated bacterial infections. Women who are pregnant, who already have a sexually transmitted disease, are experiencing menopause and women affected by anemia are vulnerable to chemical changes in the vagina facilitating bacterial growth.
In addition, research results concerning a possible correlation between vaginal bacterial infections and psychosocial stress was published in a 2006 edition of the American Journal of Obstetrics and Gynecology and pointed to a positive association that was independent of other variables.

Treatment for a bacterial vagina infection usually involves antibiotics such as metronidazole, which is given in pill form; or clindamycin, a cream inserted into the vagina for at least seven days.