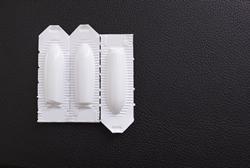 Vaginal bacterial infections are unpleasant to have and deal with, so the best thing you can do if you have one is get it treated as soon as possible. The most common way to treat such infections is by using antibiotics.

Your doctor will prescribe you an antibiotic that may be any of several commonly used medications. Most vaginal bacterial infections are treated with clindamycin, metronidazole, or tinidazole. These medications destroy the bacteria that cause the infection.

Clindamycin is also known as Cleocin and Clindesse. It comes in either an oral or vaginal form. Metronidazole is also known as Flagyl (the oral form) or MetroGel (the vaginal form).
Tinidazole is known as Tindamax and only comes in an oral form. If you get an oral form of the medicine, you'll receive a pill that you swallow a certain number of times per day. If you get a vaginal form, you'll receive a cream, gel, or ointment along with an applicator so you can properly apply the medicine to the vagina.

The upside of using a vaginal antibiotic is that nausea, vomiting, and other systemic side effects are far less likely than with an oral antibiotic. However, the risk of a vaginal yeast infection increases if you use vaginal antibiotics. You can discuss with your doctor if you would prefer one type of administration over the other.

Both forms of metronidazole have a 9 out of 10 success rate of curing vaginal bacterial infections. Tinidazole has a similar success rate. Clindamycin has not been as well studied in a controlled setting but still has a high effectiveness, though the CDC believes that it may not be as effective as metronidazole or tinidazole.
Some doctors recommend that the antibiotic be used after the infection has gone to prevent it from returning. As many as 50% of vaginal bacterial infections return after treatment is stopped, so ask your doctor if you should continue to use the antibiotic even after the infection goes away.

While taking antibiotics for vaginal bacterial infections, do not drink alcohol or use any alcohol-based medication (such as Nyquil) or alcohol-containing product (such as mouthwash).
Consuming alcohol while on antibiotics can lead to severe nausea and vomiting.