What is Vaginal Bacterial Infection 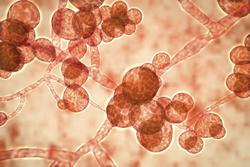 A vaginal bacterial infection, also commonly called bacterial vaginosis, is an infection of the vagina that is caused by an overgrowth of bacteria.

It is not a sexually transmitted disease, but an imbalance of bacteria that are already naturally present in large numbers in the vagina.
In a healthy vagina, the pH is slightly acidic and there is a certain blend of microbial flora consisting of bacteria and yeasts, which are single-celled fungi. Many species of bacteria are present in the vagina, including species in the genera Lactobacillus, Bacteroides and Gardnerella.
The vaginal microbial flora differs slightly from person to person, just like the gut microbial flora differs from person to person. If something disrupts the pH of the vagina, decreasing its acidity, or antibiotics are used to treat an infection elsewhere in the body, the predominant Lactobacillus species are generally more sensitive to these changes and they begin to die off.
When this happens, the other species tend to overgrow because of the decreased competition for resources, and bacteria that normally do not cause a problem may start to cause a problem. Sexually active women may have a higher chance of developing a bacterial infection of the vagina than non-sexually active women, but this is due to pH disruption of the vagina rather than sexual transmission of the disease.