Numerous glands - labial, buccal, palatine and lingual - have already been mentioned, which pour their secretions into the mouth cavity. In addition to these, there are three larger pairs, the salivary glands proper. They include the parotid, the submaxillary, and the sublingual (the latter really a group of glands).

The parotid gland [gl. parotis] is the largest of the salivary glands, varying from 15 to 30 gm. in weight. It is located below and in front of the ear in the retromandibular fossa, extending from the zygomatic arch above to the angle of the mandible below. 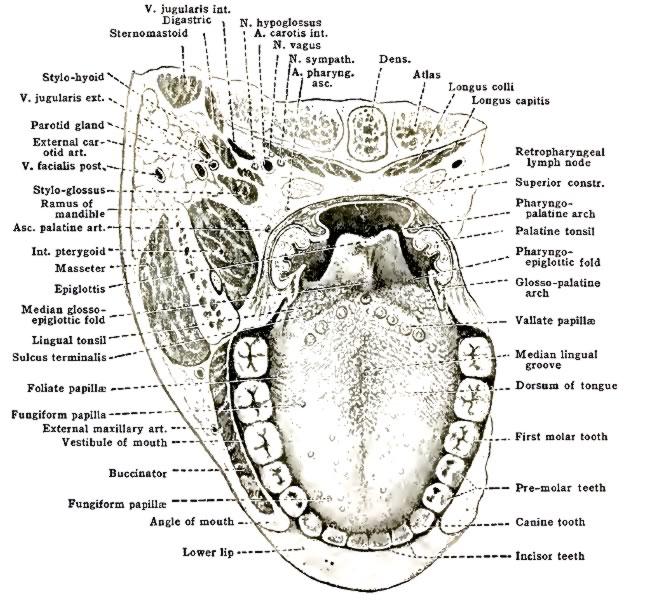 The anterior border usually extends from below obliquely upward and forward so as to give the whole superficial surface a triangular appearance. Near the upper end of the anterior border, the parotid duct leaves the gland, and just above this there is usually a small separate accessory lobe [gl. parotis accessoria], of variable form and size. The branches of the facial nerve also emerge from the anterior border. The posterior border extends along the anterior aspect of the sterno-mastoid muscle up to the mastoid process. The medial border is deeply placed (at the junction of the anterior and posterior surfaces), and approaches the wall of the pharynx.

The parotid gland is enclosed in a sheath (called the parotid fascia or aponeurosis) derived from the deep fascia of the neighborhood. The superficial layer of the sheath covers the lateral surface of the gland, while the deep layers correspond to the anterior and posterior surfaces of the gland. The sheath is very feeble or deficient at the medial angle. The superficial and deep layers of the parotid sheath unite below to form a thick fascial band extending from the angle of the mandible to the sterno-mastoid muscle.

Within the sheath, the parotid gland is in intimate relation with numerous important structures. Extending along the medial border, and partly embedded in the gland, is the external carotid artery, dividing above into the superficial temporal and internal maxillary (including the origins of the deep auricular and transverse facial); and the posterior facial (temporo-maxillary) vein and branches. The auriculo-temporal nerve passes through the upper part of the gland, while the facial nerve passes somewhat horizontally through it, dividing into its temporo-facial and cervico-facial divisions. Finally, there are embedded m the gland two or three deep lymphatic nodes, which receive lymphatic vessels from the external auditory meatus, the soft palate and the posterior part of the nasal fossa; and several superficial nodes, which receive lymphatic vessels from the temple, eyebrows and eyelids, cheek and auricle.

The parotid is a racemose gland of the serous type.

The duct of the parotid (Stenson's) issues from the anterior border of the gland, crosses the masseter a finger's breadth below the zygoma, and turns abruptly medialward round its anterior border. It penetrates the fat of the cheek and the fibers of the buccinator muscle, between which and the mucous membrane it runs for a short distance before it terminates, sometimes on the summit of a little papilla, by a minute orifice. This opening is placed opposite the crown of the second upper molar tooth. The duct commences by numerous branches, which converge toward the anterior border of the gland, and receives in its passage across the masseter the duct of the accessory parotid gland. The canal is about the size of a crow-quill, length about 35 to 40 mm., diameter 3 mm. Its mucous membrane is covered for a short distance, beginning with its oral termination, by stratified pavement epithelium, for the remainder of the distance by columnar epithelium. The coat of the duct is thick and tough, and consists of fibrous tissue intermixed with non-striated muscle-fibers.

The arteries are derived from those lying in the gland substance and from the posterior auricular artery.

The veins terminate in the posterior facial (temporo-maxillary) trunk.

The parotid gland receives its secretory fibers from the otic ganglion, conveying impulses from the glosso-pharyngeal via the lesser petrosal and the auriculo-temporal; its sensory supply through branches of the fifth nerve; and its sympathetic supply from the carotid plexus. The lymphatics from the parotid gland terminate in the superficial and deep cervical glands, especially in the deeper group of parotid nodes embedded in the substance of the gland.

The parotid is quite variable in size and in the form of its various processes, especially of the accessory lobe, as already mentioned. The lobulations are less distinct in infancy. Rarely the parotid is confined to the masseteric region, the retro-mandibular fossa being filled with a fatty tissue enclosing the vessels and nerves normally found with the gland.

The submaxillary gland [gl. submaxillaris] weighs 7 to 10 grams, and is of about the form and size of a flattened walnut. It consists of a chief or superficial part, and a smaller deep process. The chief portion is located in the digastric triangle, and presents three surfaces - superficial, deep and lateral. 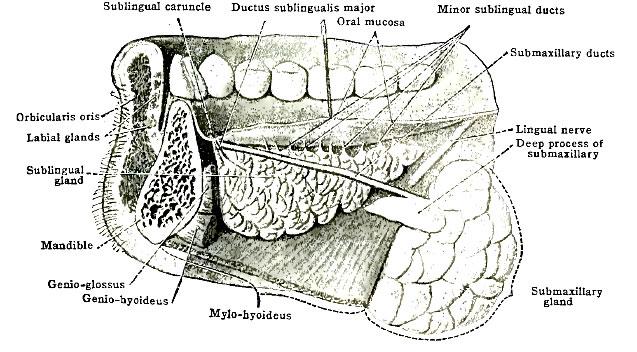 The superficial or latero-inferior surface is covered by skin, superficial fascia, platysma and deep fascia (which forms an incomplete capsule around the gland). It is crossed by the facial vein and by cervical branches of the facial nerve. Several lymphatic glands, which receive vessels from the anterior facial region, lie upon or embedded in this surface.

The lateral surface is the smallest of the three. It is in contact with the sub-maxillary fossa of the medial surface of the mandible, and with the lower part of the internal pterygoid muscle. The posterior aspect of the gland is deeply grooved by the external maxillary (facial) artery and is separated from the parotid gland by the stylo-mandibular ligament. The deep or medio-superior surface is in contact with the lower surface of the mylohyoid, and behind this with thehyo-glossus, stylohyoid and posterior belly of the digastric. Between this surface and the mylohyoid muscle are the mylohyoid nerve and artery and the sub-mental artery.

The deep portion is a tongue-like process which passes from the deep surface of the submaxillary gland around the posterior border of the mylohyoid muscle, and extends forward in company with the duct, under cover of (above) the mylo-hyoid, and in relation with the hyoglossus and genioglossus muscles. At its commencement, the deep process lies just below the submaxillary ganglion and anteriorly it gives off the submaxillary duct as it approaches the sublingual gland.

The submaxillary is a racemose gland belonging to the mixed type, some of the acini being serous, others mucous.

The submaxillary (Wharton's) duct springs from the deep surface of the superficial part of the gland; it passes forward and inward, along the medial surface of the deep lobe, and opens by a small orifice on the summit of a papilla [caruncula sublingualis] by the side of the frenulum of the tongue. It is crossed superficially by the lingual nerve. It lies at first between the mylo-hyoid and hyoglossus; next, between the mylohyoid and genioglossus; and lastly, under cover of the mucous membrane of the mouth, between the genioglossus and the sublingual gland. The duct is about 5 cm. in length, and has comparatively thin walls. It is lined by columnar epithelium.

The arteries to the gland are derived from the external maxillary (facial) and lingual, and they are accompanied by corresponding veins.

Absence of the gland is a rare anomaly. A case is recorded (Turner) where the submaxillary was placed entirely under cover of the mylohyoid, being closely associated with the sublingual gland.

The sublingual gland [gl. sublingualis] - the smallest of the salivary glands (2 to 3 gm.) is in reality a group of glands forming an elongated mass in the floor of the mouth under the tongue. Above, it forms a distinct ridge, covered by a fold of mucosa (plica sublingualis) upon which its ducts open. It is flattened from side to side, its lower border resting upon the upper surface of the mylohyoid, its lateral surface in contact with the sublingual fossa of the mandible, and its medial surface with the geniohyoid, geniohyoglossus, lingual nerve, deep lingual artery and submaxillary duct. Anteriorly it touches its fellow of the opposite side, while 'posteriorly it is often related with the deep process of the submaxillary gland. It has no distinct capsule, thus differing from the submaxillary and parotid glands. In structure, it is a racemose mixed gland, but predominantly mucous.

The minor sublingual duels [ductus sublinguales minores], ducts of Rivinus, vary from five to fifteen or more in number, and open on minute papillae along the crest of the plica sublingualis. The anterior portion of the gland often forms a larger [Bartholin' s) duel [ductus sublingualis major] which opens alongside the submaxillary duct on the caruncula sublingualis.

The arteries are derived from the sublingual and submental, with corresponding veins. The lymphatics are tributaries of the superior deep cervical nodes.

The sublingual glands receive their secretory fibers from the submaxillary and associated sympathetic ganglia, conveying impulses from the chorda tympani; sympathetic, branches come from the cervical sympathetic and sensory fibers probably from the geniculate ganglion, although this question needs further investigation.

Development of the salivary glands

The salivary glands appear early as buds from the ectodermal epithelium extending into the adjacent mesenchyme of the mouth cavity. The parotid appears first on the side of the mouth cavity in an embryo of 8 mm., as a groove which becomes tubular and pushes back over the masseter to the ear region, developing branches (at first solid). Around the gland and between the branches is mesenchyme which becomes condensed to form the peripheral capsule. The submaxillary gland appears in the 13 mm. embryo as a ridge in the epithelium of the alveolo-lingual groove. The solid cord (lumen appearing later) grows forward to the region of its adult orifice. Its posterior end extends backward and gives off solid branches which later form the acini and duct system of the mature gland. The sublingual glands appear somewhat later (24 mm. embryo) as a series of separate anlages of variable number, budding off in the positions where the adult ducts empty. The major sublingual gland, if present, appears first. The histogenetic development of the salivary glands is not completed until sometime after birth, probably about the time of weaning. However, mucin cells appear in the sublingual glands in the fetus of four months and serous cells in the parotid of five months.

The duct of Bartholin is present in about half of the cases, and the corresponding anterior part of the gland may be more or less separate [gl. sublingualis major]. The number of ducts may reach thirty (Tillaux). Rarely processes from the gland may penetrate the mylohyoid, appearing on its lower surface in one or more places (Moustin). Most of the variations in this and the other salivary glands are due to developmental irregularities.

Oral glands are not found in the lower aquatic vertebrates. Mucous glands occur in all terrestrial vertebrates, but true salivary (digestive) glands appear only in mammals. Although great variations occur in the different species of mammals, those in man (excepting the anterior lingual) are typical for the order. The sublingual gland, however, often occurs as two separate glands, corresponding to the sublingualis major and minor. The parotid gland apparently has no representative in forms below mammals. In some mammals (e. g., monkey) it has two main lobes - a larger superficial and a smaller deeper lobe between which lies the facial nerve (Gregoire). Other oral glands (e. g., orbital, zygomatic) appear in some mammals.