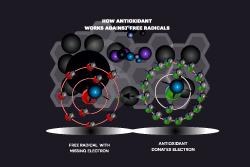 Aging is a mysterious process to many people. The theory of aging and free radicals has become quite mainstream in recent history. Understanding this theory takes a bit of technical knowledge. To understand free radicals, you have to understand the normal function of a cell.

The Free Radical Theory of Aging was first proposed by Denham Harman in the 1950s. This theory has steadily gained popularity in recent times. Studies with mice have shown that reducing the damage caused by free radicals to the body can actually extend life.
Many diseases have been linked to free radical damage within cells. These diseases include cancer, diabetes, atherosclerosis and Alzheimer's disease. There are several ideas circulating within the Free Radical Theory of Aging.
The first idea is that free radicals cause diseases which then quicken aging. The second idea is that all aging is caused by the influence of free radicals. This means that without free radicals, cells could in theory, continually repair themselves. It is thought that free radicals actually damage the very DNA of the human body.

Continual research has shown that certain strains of roundworms that are extremely susceptible to free radicals have a much shorter lifespan than other strains. Studies have also shown that caloric restriction might help to suppress the development of certain diseases that are thought to be caused by free radical exposure.
These studies include fasting and caloric restriction of up to 50% in mice. Similar studies have not been accomplished using human subjects. Scientists have also tested the theory that increased consumption of antioxidants might help to slow or even reverse cellular damage caused by free radicals.
This theory has not been proven in humans but has been tested in mice and other rodents. Because of varied findings, antioxidants have not been proven to slow aging at this time.

Free radicals seem to be the catalyst for cellular damage and aging. Scientists cannot seem to agree on the extent of affect that free radicals have on the human body. Nor can they agree on what is the best way to neutralize this effect.
Continuing research is needed to explore the relationship between free radicals and normal cell lifespan. Research is also needed to prove or disprove the assumed benefits of antioxidants for preventing premature aging.