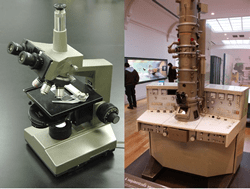 A cell is the smallest unit of a living thing. A living thing, whether made of one cell (like bacteria) or many cells (like a human), is called an organism. Thus, cells are the basic building blocks of all organisms.

The Endomembrane System and Proteins

In addition to the presence of nuclei, eukaryotic cells are distinguished by an endomembrane system that includes the plasma membrane, nuclear envelope, lysosomes, vesicles, endoplasmic reticulum, and Golgi apparatus. These subcellular components work together to modify, tag, package, and transport proteins and lipids. The rough endoplasmic reticulum (RER) with its attached ribosomes is the site of protein synthesis and modification. The smooth endoplasmic reticulum (SER) synthesizes carbohydrates, lipids including phospholipids and cholesterol, and steroid hormones; engages in the detoxification of medications and poisons; and stores calcium ions. Lysosomes digest macromolecules, recycle worn-out organelles, and destroy pathogens. Just like your body uses different organs that work together, cells use these organelles interact to perform specific functions. For example, proteins that are synthesized in the RER then travel to the Golgi apparatus for modification and packaging for either storage or transport. If these proteins are hydrolytic enzymes, they can be stored in lysosomes. Mitochondria produce the energy needed for these processes. This functional flow through several organelles, a process which is dependent on energy produced by yet another organelle, serves as a hallmark illustration of the cell’s complex, interconnected dependence on its organelles.

Connections between Cells and Cellular Activities

Most animal cells release materials into the extracellular space. The primary components of these materials are proteins, and the most abundant protein is collagen. Collagen fibers are interwoven with carbohydrate-containing protein molecules called proteoglycans.

All cells, from simple bacteria to complex eukaryotes, possess a cytoskeleton composed of different types of protein elements, including microfilaments, intermediate filaments, and microtubules. The cytoskeleton serves a variety of purposes: provides rigidity and shape to the cell, facilitates cellular movement, anchors the nucleus and other organelles in place, moves vesicles through the cell, and pulls replicated chromosomes to the poles of a dividing cell. These protei elements are also integral to the movement of centrioles, flagella, and cilia.

Eukaryotic cells possess many features that prokaryotic cells lack, including a nucleus with a double membrane that encloses DNA. In addition, eukaryotic cells tend to be larger and have a variety of membrane-bound organelles that perform specific, compartmentalized functions. Evidence supports the hypothesis that eukaryotic cells likely evolved from prokaryotic ancestors; for example, mitochondria and chloroplasts feature characteristics of independently-living prokaryotes. Eukaryotic cells come in all shapes, sizes, and types (e.g. animal cells, plant cells, and different types of cells in the body). (Hint: This a rare instance where you should create a list of organelles and their respective functions because later you will focus on how various organelles work together, similar to how your body’s organs work together to keep you healthy.) Like prokaryotes, all eukaryotic cells have a plasma membrane, cytoplasm, ribosomes, and DNA. Many organelles are bound by membranes composed of phospholipid bilayers embedded with proteins to compartmentalize functions such as the storage of hydrolytic enzymes and the synthesis of proteins. The nucleus houses DNA, and the nucleolus within the nucleus is the site of ribosome assembly. Functional ribosomes are found either free in the cytoplasm or attached to the rough endoplasmic reticulum where they perform protein synthesis. The Golgi apparatus receives, modifies, and packages small molecules like lipids and proteins for distribution. Mitochondria and chloroplasts participate in free energy capture and transfer through the processes of cellular respiration and photosynthesis, respectively. Peroxisomes oxidize fatty acids and amino acids, and they are equipped to break down hydrogen peroxide formed from these reactions without letting it into the cytoplasm where it can cause damage. Vesicles and vacuoles store substances, and in plant cells, the central vacuole stores pigments, salts, minerals, nutrients, proteins, and degradation enzymes and helps maintain rigidity. In contrast, animal cells have centrosomes and lysosomes but lack cell walls.

Cells fall into one of two broad categories: prokaryotic and eukaryotic. Only the predominantly single-celled organisms of the domains Bacteria and Archaea are classified as prokaryotes (pro- = “before”; -kary- = “nucleus”). Cells of animals, plants, fungi, and protists are all eukaryotes (ceu- = “true”) and are made up of eukaryotic cells.