The tibia is the larger bone of the leg; it is situated on the inner side of, and nearly parallel with, the fibula. The upper extremity, or head, consists of two lateral eminences, or tuberosities.

The superior surfaces of the tuberosities receive the condyles of the femur, the articular surfaces being separated by a non-articular ridge, to which ligaments are attached. The internal articular surface is oval in shape and concave for the internal condyle of the femur. The external articular surface is smaller, somewhat circular in shape, and presents an almost plane surface for the external condyle. The peripheral portion of each articular surface is overlaid by a fibrocartilage of semilunar shape, connected with the margins of the tuberosities by bands of fibrous tissue, termed coronary ligaments. Each semilunar fibro-cartilage is attached firmly to the rough tract separating the articular surfaces. This intermediate space is broad and depressed in front, where it affords attachment to the anterior limb of the internal and external semilunar cartilages and the anterior crucial ligament. Standing upwards from the middle of this surface is the spine of the tibia. The posterior aspect of the base of the spine affords attachment to the posterior limb of the external and internal semilunar fibro-cartilages, and limits a deep notch inclined towards the inner tuberosity; this notch gives origin to the posterior crucial ligament. Anteriorly, the two tuberosities are confluent, and form a somewhat flattened surface of triangular outline; its apex forms the tubercle of the tibia. The patellar ligament is inserted into the lower part of the tubercle; the upper part is smooth and separated from the ligament by a bursa. Laterally the inner tuberosity is less prominent, though more extensive than the outer; near the posterior part of its circumference, there is a deep horizontal groove for the central portion |of the semimembranosus tendon. The margins of this groove and the surface of bone below give attachment to the internal lateral ligament of the knee. At a corresponding point of the outer tuberosity, there is a rounded articular facet for the head of the fibula; the circumference of the facet is rough for ligaments. 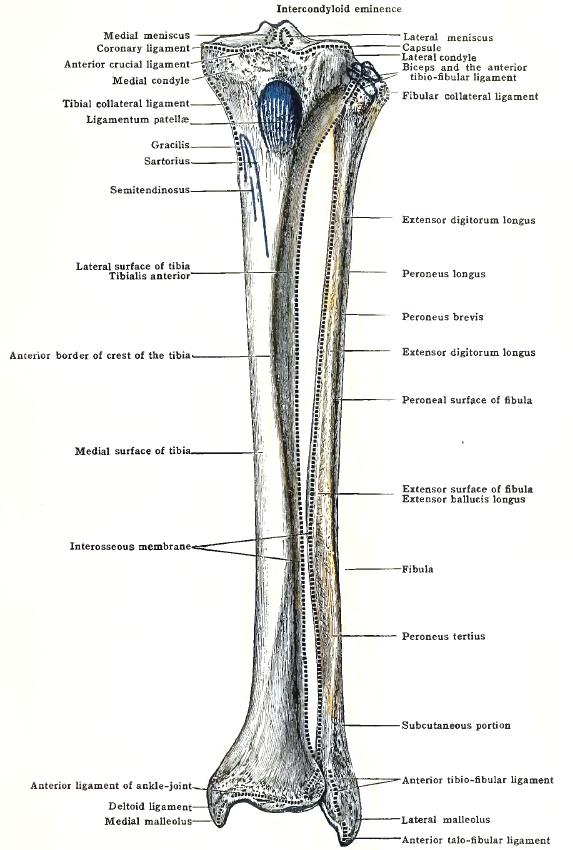 The shaft is prismatic, and very thick near the head; towards the lower third it is thinner and tapering, and gradually expands towards the lower end. It has three borders: the anterior is very prominent, and known as the crest of the tibia: commencing on the outer edge of the tubercle, it runs downwards and curves; inwards, to terminate at the anterior margin of the malleolus. This border gives attachment to the deep fascia of the leg. The internal border starts from the back of the internal tuberosity and ends at the posterior margin of the malleolus. The internal lateral ligament is attached to its upper 7.5 cm. (3"), and the middle third gives origin to the soleus. The interosseous border extends from the fibular facet on the outer tuberosity to the lower end of the bone; towards its termination, the border bifurcates to enclose a triangular space for the attachment of the interosseous ligament between the tibia and fibula. The part above the bifurcation is connected with the interosseous membrane. 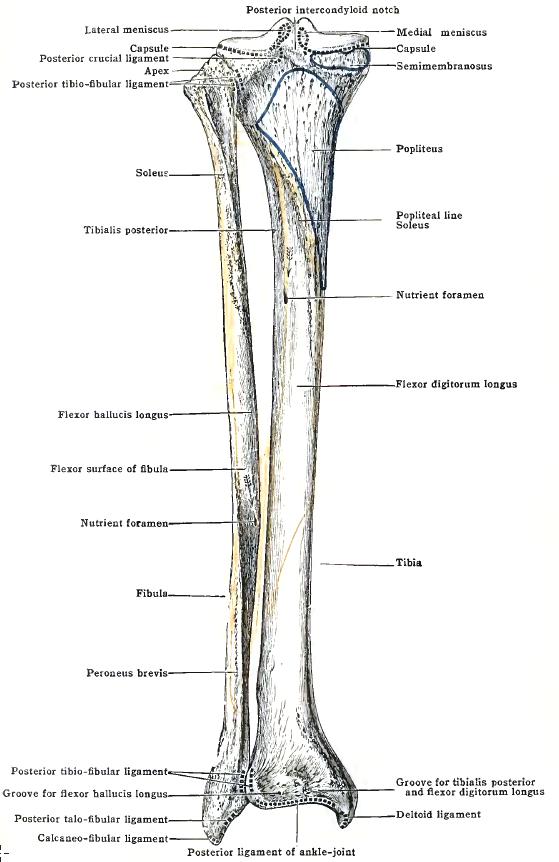 The internal surface is bounded by the internal border and the crest; it is broad above, where it receives the insertion of the sartorius, gracilis, and semitendinosus; the rest of the surface is convex and subcutaneous. The external surface lies between the crest of the tibia and the interosseous border. The upper two-thirds presents a hollow for the origin of the tibialis anterior; the rest of the surface is overlaid by the extensor tendons and the anterior tibial vessels. The posterior surface is limited by the interosseous ridge and the internal border. The upper part presents a rough oblique ridge, extending from the fibular facet on the outer tuberosity to the internal border, a little above the middle of the bone. This oblique ridge gives origin to the soleus and attachment to the popliteal fascia; the surface above is for the insertion of the popliteus. An indefinite vertical ridge commences near the middle of the oblique line and marks off a semilunar space, limited externally by the interosseous border. This is for the tibialis posterior; it extends as low as the junction of the middle and lower thirds. The portion of bone outside this vertical line is for the flexor longus digitorum. The lower third of the posterior surface is covered by flexor tendons. 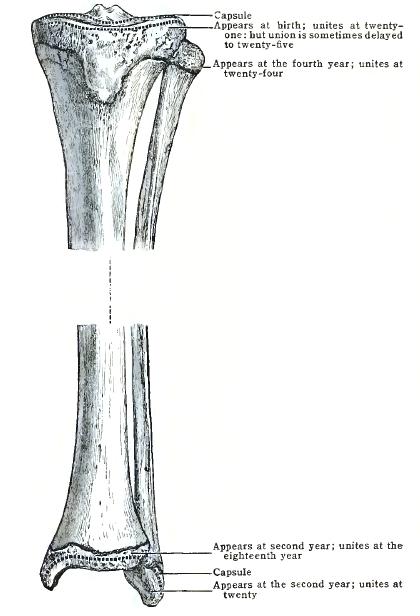 The tibia and fibula at the sixteenth year.

The figure shows the relations of the epiphysial and capsular lines.

The tibia affords attachment to the following muscles

Blood-supply of the tibia

The tibia is a very vascular bone. The nutrient artery for the shaft is furnished by the posterior tibial; it enters the bone near the interosseous border at the junction of the upper and middle thirds and is directed downwards. The head of the bone receives numerous branches from the inferior articular arteries of the popliteal, and the recurrent branches of the anterior and posterior tibial arteries. The lower extremity receives twigs from the posterior and anterior tibial, the anterior peroneal, and internal malleolar arteries.

The center for the shaft of the tibia appears in the eighth week of intra-uterine life. Towards the end of the ninth month, a small earthy nucleus appears in the cartilaginous head of the tibia. The nucleus for the lower extremity appears in the second year and unites with the shaft at eighteen. The epiphysis for the head of the bone is one of the last to unite with its shaft; this event usually occurs about the twenty-first year, but may be delayed until twenty-five. The tubercle of the tibia is usually ossified from the epiphysis; occasionally it has an independent nucleus.