Bone contains a relatively small number of cells entrenched in a matrix of collagen fibers that provide a surface for inorganic salt crystals to adhere. These salt crystals form when calcium phosphate and calcium carbonate combine to create hydroxyapatite, which incorporates other inorganic salts like magnesium hydroxide, fluoride, and sulfate as it crystallizes, or calcifies, on the collagen fibers. The hydroxyapatite crystals give bones their hardness and strength, while the collagen fibers give them flexibility so that they are not brittle.

Although bone cells compose a small amount of the bone volume, they are crucial to the function of bones. Four types of cells are found within bone tissue: osteoblasts, osteocytes, osteogenic cells, and osteoclasts. 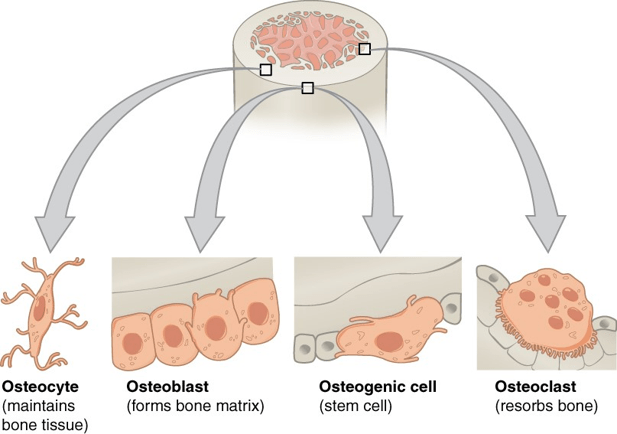 Bone Cells Four types of cells are found within bone tissue. Osteogenic cells are undifferentiated and develop into osteoblasts. When osteoblasts get trapped within the calcified matrix, their structure and function changes, and they become osteocytes. Osteoclasts develop from monocytes and macrophages and differ in appearance from other bone cells.

The osteoblast is the bone cell responsible for forming new bone and is found in the growing portions of bone, including the periosteum and endosteum. Osteoblasts, which do not divide, synthesize and secrete the collagen matrix and calcium salts. As the secreted matrix surrounding the osteoblast calcifies, the osteoblast become trapped within it; as a result, it changes in structure and becomes an osteocyte, the primary cell of mature bone and the most common type of bone cell. Each osteocyte is located in a space called a lacuna and is surrounded by bone tissue. Osteocytes maintain the mineral concentration of the matrix via the secretion of enzymes. Like osteoblasts, osteocytes lack mitotic activity. They can communicate with each other and receive nutrients via long cytoplasmic processes that extend through canaliculi (singular = canaliculus), channels within the bone matrix.

The dynamic nature of bone means that new tissue is constantly formed, and old, injured, or unnecessary bone is dissolved for repair or for calcium release. The cell responsible for bone resorption, or breakdown, is the osteoclast. They are found on bone surfaces, are multinucleated, and originate from monocytes and macrophages, two types of white blood cells, not from osteogenic cells. Osteoclasts are continually breaking down old bone while osteoblasts are continually forming new bone. The ongoing balance between osteoblasts and osteoclasts is responsible for the constant but subtle reshaping of bone. Table 6.3 reviews the bone cells, their functions, and locations.

The differences between compact and spongy bone are best explored via their histology. Most bones contain compact and spongy osseous tissue, but their distribution and concentration vary based on the bone’s overall function. Compact bone is dense so that it can withstand compressive forces, while spongy (cancellous) bone has open spaces and supports shifts in weight distribution.

Compact bone is the denser, stronger of the two types of bone tissue. It can be found under the periosteum and in the diaphyses of long bones, where it provides support and protection. 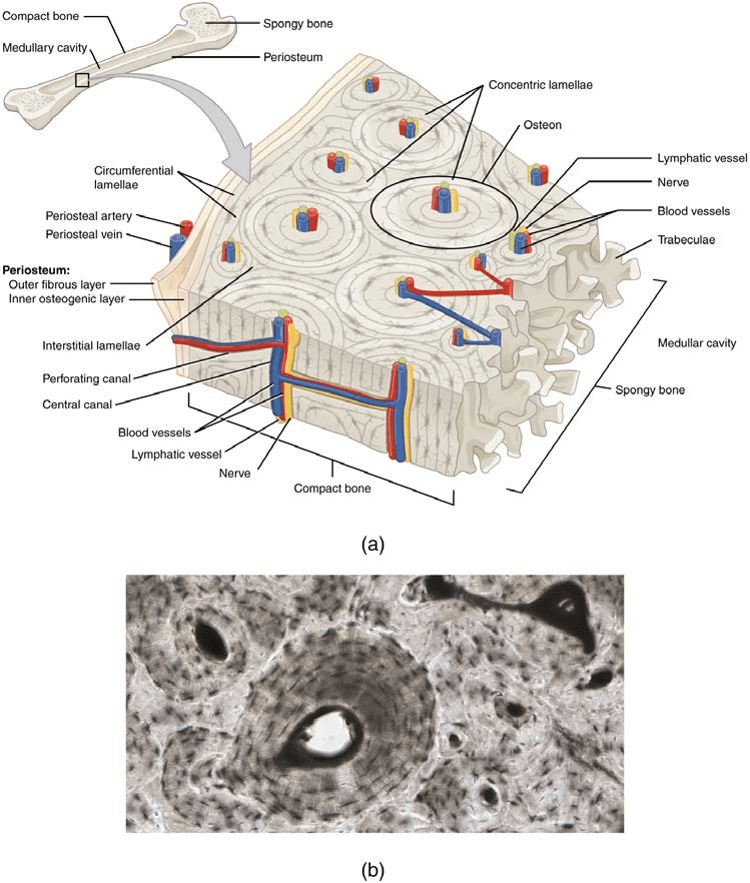 Diagram of Compact Bone (a) This cross-sectional view of compact bone shows the basic structural unit, the osteon. (b) In this micrograph of the osteon, you can clearly see the concentric lamellae and central canals. LM × 40. (Micrograph provided by the Regents of University of Michigan Medical School © 2012)

The microscopic structural unit of compact bone is called an osteon, or Haversian system. Each osteon is composed of concentric rings of calcified matrix called lamellae (singular = lamella). Running down the center of each osteon is the central canal, or Haversian canal, which contains blood vessels, nerves, and lymphatic vessels. These vessels and nerves branch off at right angles through a perforating canal, also known as Volkmann’s canals, to extend to the periosteum and endosteum.

The osteocytes are located inside spaces called lacunae (singular = lacuna), found at the borders of adjacent lamellae. As described earlier, canaliculi connect with the canaliculi of other lacunae and eventually with the central canal. This system allows nutrients to be transported to the osteocytes and wastes to be removed from them.

Like compact bone, spongy bone, also known as cancellous bone, contains osteocytes housed in lacunae, but they are not arranged in concentric circles. Instead, the lacunae and osteocytes are found in a lattice-like network of matrix spikes called trabeculae (singular = trabecula). The trabeculae may appear to be a random network, but each trabecula forms along lines of stress to provide strength to the bone. The spaces of the trabeculated network provide balance to the dense and heavy compact bone by making bones lighter so that muscles can move them more easily. In addition, the spaces in some spongy bones contain red marrow, protected by the trabeculae, where hematopoiesis occurs. 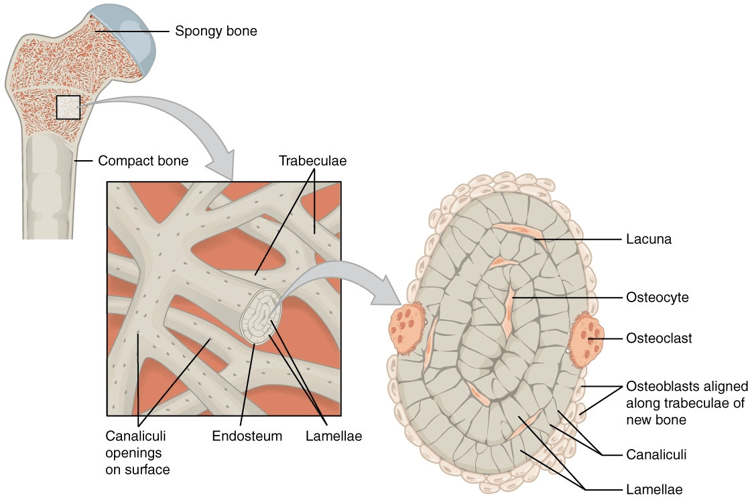 Diagram of Spongy Bone Spongy bone is composed of trabeculae that contain the osteocytes. Red marrow fills the spaces in some bones