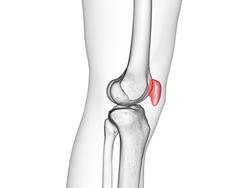 The patella or knee-pan (French : la rotule), situated in front of the knee-joint, is a sesamoid bone, triangular in shape, developed in the tendon of the quadriceps femoris.

Its anterior surface, marked by numerous longitudinal striae, is slightly convex, and perforated by small openings which transmit nutrient vessels to the interior of the bone. It is covered in the recent state by a few fibers prolonged from the common tendon of insertion (supra-patellar tendon) of the quadriceps femoris, into the ligamentum patellae (infra-patellar tendon), and is separated from the skin by one or more bursae. The posterior surface is largely articular, covered with cartilage in the recent state, and divided by a slightly marked vertical ridge, corresponding to the groove on the trochlear surface of the femur, into a lateral larger portion for the lateral condyle, and a medial smaller portion for the medial condyle. Close to the medial edge a faint vertical ridge sometimes marks off a narrow articular facet, for the lateral margin of the medial condyle of the femur in extreme flexion of the leg. Below the articular surface is a rough, non-articular depression, giving attachment to the ligamentum patellae, and separated by a mass of fat from the head of the tibia.

The base or superior border is broad, sloped from behind downward and for- ward, and affords attachment, except near the posterior margin, to the common tendon of the quadriceps. The borders, thinner than the base, converge to the apex below, and receive parts of the two vast muscles. The apex forms a blunt point directed downward, and gives attachment to the ligamentum patellae, by which the patella is attached to the tibia.

The superior border or base of the left patella.

Structurally the patella consists of dense cancellous tissue covered by a thin compact layer, and it receives nutrient vessels from the articular branch of the suprema genu (anastomotic), the anterior tibial recurrent, and the inferior articular branches of the popliteal.

Ossification of the patella

The cartilaginous deposit in the tendon of the quadriceps muscle takes place in the fourth month of intra-uterine life. Ossification begins from a single center during the third year, and is completed about the age of puberty.


Anterior view of the patella Posterior view of the patella 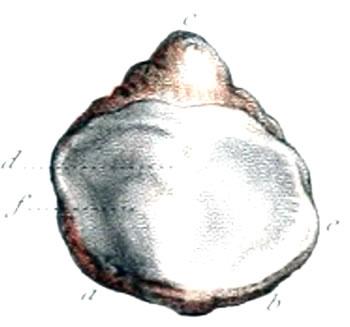