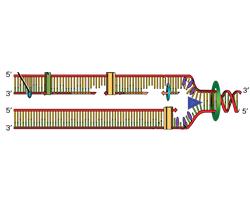 DNA replication has been extremely well studied in prokaryotes primarily because of the small size of the genome and the mutants that are available.

E. coli has 4.6 million base pairs in a single circular chromosome and all of it gets replicated in approximately 42 minutes, starting from a single origin of replication and proceeding around the circle in both directions. This means that approximately 1000 nucleotides are added per second. The process is quite rapid and occurs without many mistakes.

DNA replication employs a large number of proteins and enzymes, each of which plays a critical role during the process. One of the key players is the enzyme DNA polymerase, also known as DNA pol, which adds nucleotides one by one to the growing DNA chain that are complementary to the template strand. The addition of nucleotides requires energy; this energy is obtained from the nucleotides that have three phosphates attached to them, similar to ATP which has three phosphate groups attached. When the bond between the phosphates is broken, the energy released is used to form the phosphodiester bond between the incoming nucleotide and the growing chain. In prokaryotes, three main types of polymerases are known: DNA pol I, DNA pol II, and DNA pol III. It is now known that DNA pol III is the enzyme required for DNA synthesis;

DNA pol I and DNA pol II are primarily required for repair.

How does the replication machinery know where to begin? It turns out that there are specific nucleotide sequences called origins of replication where replication begins. In E. coli, which has a single origin of replication on its one chromosome (as do most prokaryotes), it is approximately 245 base pairs long and is rich in AT sequences. The origin of replication is recognized by certain proteins that bind to this site. An enzyme called helicase unwinds the DNA by breaking the hydrogen bonds between the nitrogenous base pairs. ATP hydrolysis is required for this process. As the DNA opens up, Y-shaped structures called replication forks are formed. Two replication forks are formed at the origin of replication and these get extended bi- directionally as replication proceeds. Single-strand binding proteins coat the single strands of DNA near the replication fork to prevent the single-stranded DNA from winding back into a double helix. DNA polymerase is able to add nucleotides only in the 5' to 3' direction (a new DNA strand can be only extended in this direction). It also requires a free 3'-OH group to which it can add nucleotides by forming a phosphodiester bond between the 3'-OH end and the 5' phosphate of the next nucleotide. This essentially means that it cannot add nucleotides if a free 3'-OH group is not available. Then how does it add the first nucleotide? The problem is solved with the help of a primer that provides the free 3'-OH end. Another enzyme, RNA primase, synthesizes an RNA primer that is about five to ten nucleotides long and complementary to the DNA. Because this sequence primes the DNA synthesis, it is appropriately called the primer. DNA polymerase can now extend this RNA primer, adding nucleotides one by one that are complementary to the template strand.

A replication fork is formed when helicase separates the DNA strands at the origin of replication. The DNA tends to become more highly coiled ahead of the replication fork. Topoisomerase breaks and reforms DNA’s phosphate backbone ahead of the replication fork, thereby relieving the pressure that results from this “supercoiling.” Single-strand binding proteins bind to the single-stranded DNA to prevent the helix from re-forming. Primase synthesizes an RNA primer. DNA polymerase III uses this primer to synthesize the daughter DNA strand. On the leading strand, DNA is synthesized continuously, whereas on the lagging strand, DNA is synthesized in short stretches called Okazaki fragments. DNA polymerase I replaces the RNA primer with DNA. DNA ligase seals the gaps between the Okazaki fragments, joining the fragments into a single DNA molecule. (credit: modification of work by Mariana Ruiz Villareal)

The leading strand can be extended by one primer alone, whereas the lagging strand needs a new primer for each of the short Okazaki fragments. The overall direction of the lagging strand will be 3' to 5', and that of the leading strand 5' to 3'. A protein called the sliding clamp holds the DNA polymerase in place as it continues to add nucleotides. The sliding clamp is a ring-shaped protein that binds to the DNA and holds the polymerase in place. Topoisomerase prevents the over-winding of the DNA double helix ahead of the replication fork as the DNA is opening up; it does so by causing temporary nicks in the DNA helix and then resealing it. As synthesis proceeds, the RNA primers are replaced by DNA. The primers are removed by the exonuclease activity of DNA pol I, and the gaps are filled in by deoxyribonucleotides. The nicks that remain between the newly synthesized DNA (that replaced the RNA primer) and the previously synthesized DNA are sealed by the enzyme DNA ligase that catalyzes the formation of phosphodiester linkage between the 3'-OH end of one nucleotide and the 5' phosphate end of the other fragment.

Once the chromosome has been completely replicated, the two DNA copies move into two different cells during cell division. The process of DNA replication can be summarized as follows:

Enzymes involved in prokaryotic DNA replication and the functions of each (summarized).