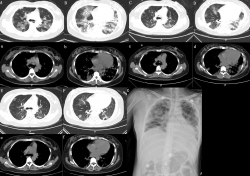 Whipple’s disease is a chronic infectious disease caused by the Gram-positive bacterium Tropheryma whipplei (TW), which not only affects the gastrointestinal tract and causes malabsorption of nutrients, but several other systems, such as the cardiovascular system, central nervous system, the joints, and the vascular system, can also be simultaneously involved.

The aim of this report was to be able to alert the clinician to severe pneumonia caused by TW combined with Candida sp.

The case study was conducted on patients in September and November 2019. After routine examination and treatment, the results were not satisfactory. A bronchoalveolar lavage (BAL) using metagenomics next-generation sequencing was conducted on two adults who presented with fever, cough, and progressive dyspnea and who had no history of gastrointestinal symptoms, immunodeficiency diseases, or use of immunosuppressive agents. TW and Candida sp. were detected in in BAL.

This is a report of life-threatening pneumonia caused by TW combined with Candida sp. in a Chinese population.