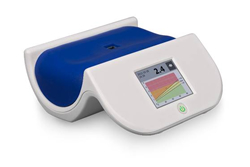 We included 2349 people with T2D, available baseline SAF measurements (measured with the AGE reader) and follow-up data from the Lifelines Cohort Study. Of them, 2071 had no clinical CVD at baseline. 60% were already diagnosed with diabetes (median duration 5, IQR 2–9 years), while 40% were detected during the baseline examination by elevated fasting blood glucose ≥7.0 mmol/l) and/or HbA1c ≥6.5% (48 mmol/mol).

Measuring SAF can assist in prediction of incident cardiovascular disease and mortality in individuals with T2D. SAF showed a stronger association with future CVD events and mortality than cholesterol or blood pressure levels.