Sex-dependent differences in the secretome of human endothelial cells 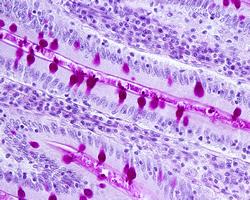 Cellular sex has rarely been considered as a biological variable in preclinical research, even when the pathogenesis of diseases with predictable sex differences is studied. In this perspective, proteomics, and “omics” approaches in general, can provide powerful tools to obtain comprehensive cellular maps, thus favoring the discovery of still unknown sex-biased physio-pathological mechanisms.

We performed proteomic and Gene Ontology (GO) analyses of the secretome from human serum-deprived male and female endothelial cells (ECs) followed by ELISA validation. Apoptosis was detected by FACS and Western blot techniques and efferocytosis through the ability of the macrophage cell line RAW 264.7 to engulf apoptotic ECs. PTX3 mRNA levels were measured by RT-qPCR.

Proteomic and GO analyses of the secretome from starved human male and female ECs demonstrated a significant enrichment in proteins related to cellular responses to stress and to the regulation of apoptosis in the secretome of male ECs. Accordingly, a higher percentage of male ECs underwent apoptosis in response to serum deprivation in comparison with female ECs. Among the secreted proteins, we reliably found higher levels of PTX3 in the male EC secretome. The silencing of PTX3 suggested that male ECs were dependent on its expression to properly carry out the efferocytotic process. At variance, female EC efferocytosis seemed to be independent on PTX3 expression.

Our results demonstrated that serum-starved male and female ECs possess different secretory phenotypes that might take part in the sex-biased response to cellular stress. We identified PTX3 as a crucial player in the male-specific endothelial response to an apoptotic trigger. This novel and sex-related role for secreted proteins, and mainly for PTX3, may open the way to the discovery of still unknown sex-specific mechanisms and pharmacological targets for the prevention and treatment of endothelial dysfunction at the onset of atherosclerosis and cardiovascular disease.