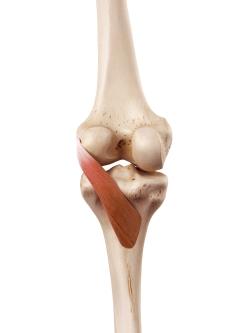 The popliteus (french : muscle poplité) - named from its position on the floor of the ham (= poples) - is a triangular sheet.

The bottom of the anterior portion of a horizontal groove on the lower part of the outer surface of the external condyle of the femur ; also by a small slip from the posterior ligament of the knee joint.

Arising by a somewhat flattened cylindrical tendon which passes at first backwards and slightly downwards within the knee joint, grooving the( posterior border of the external semilunar cartilage ; it then escapes from the capsule of the knee joint, receiving a small slip from the posterior ligament, and immediate expands into a fan -shaped muscle which forms a thick sheet, covering the upper fourth of the back of the tibia, and is inserted by fleshy fibres into the pouch formed by the bone in front and the aponeurosis derived from the semi-membranosus behind The tendon of origin is surrounded by synovial membrane, which is reflected upon it about half an inch beyond the opening, through which it emerges from the posterior ligament of the knee joint.

From the sacral plexus by the internal popliteal division of the great sciatic nerve, which sends a special branch round the lower border of the muscle to distribute itself to the lower part of its deep or anterior surface.

To flex the knee, which it will do but feebly on account of the obliquity of its direction and its proximity to the axis of the joint. When the knee is flexes it will act as an internal rotator of the leg. In this position the tendon of origin lies wholly in the groove for its reception upon the outer surface of the external condyle. It is possible that the attachment of the tendon of origin to the posterior ligament of the knee may enable the muscle when it contracts to draw backward the ligament, and so prevent the synovial membrane upon its anterior aspect from being nipped between the articular surfaces.

Behind, the aponeurosis of the semi-membranosus, the Gastronemius, Plantaris, and the popliteal vessels, nerves, and glands. In front, th knee joint. Superficial to the tendon of origin is the external lateral ligament the knee.

A second head of origin has been seen from a sesamoid bone in the outer tendon of the Gastrocnemius.