The glosso-palatine nerve (sensory root or pars intermedia of facial, nerve of Wrisberg) contains both sensory and motor fibers.

While it has a separate attachment to the medulla, it courses in close company with the facial and, in the internal auditory meatus, it is involved in the same sheath with the facial, which relation is maintained by its larger part thence through the facial canal till a short distance above the stylo-mastoid foramen. Here this larger part leaves the trunk of the facial as the chorda tympani nerve. The origin, central connections and peripheral distribution of the glosso-palatine are similar to those of the glosso-pharyngeal nerve and suggest that it may be considered an aberrant portion of that nerve.

The sensory portion is much greater than the motor. Its fibers arise from cells situated in the geniculate ganglion which thus corresponds to a spinal ganglion. The central processes from these cells pass medialward in the facial canal (aqueduct of Fallopius) enclosed in the sheath of the facial nerve, which they leave in passing through the internal auditory meatus, to turn slightly downward in the posterior fossa of the cranium and enter the medulla at the inferior border of the pons, between the attachments of the facial and vestibular nerves. They com-se through the reticular formation of the medulla, medianward and dorsalward to terminate about cells which comprise a superior extension of the nucleus of termination of the glosso-pharyngeal nerve (nucleus of ala cmerea). The peripheral processes from the geniculate ganglion are distributed chiefly to the epithelium covering the soft palate, portions of the glosso-palatine arches, and the anterior two thirds of the tongue.

The geniculate ganglion is so named from the fact that it is embedded upon the anterior border of the external genu {geniculum, great bend) of the facial nerve, behind the hiatus Fallopii. It is somewhat triangular in form. From its supero-medial angle leave the central processes of its cells, the root of the nerve; from its infero-lateral angle leave the fibers which later leave the sheath of the facial as the chorda tympani, and its anterior angle is connected with the great superficial petrosal nerve. The geniculate ganglion contains a relatively large number of cell-bodies of sympathetic neurones many of whose processes run in this latter nerve, a relation mentioned below with the gangliated cephalic plexus.

The motor portion of the glosso-palatine consists for the most part of visceral efferent fibers, chiefly secretory. These arise in the medulla oblongata from a small group of cells scattered in the reticular formation dorso-medial to the nucleus of the facial and in line with the dorsal efferent nucleus of the vagus below. It is called the salivaiory nucleus. The fibers course ventralward and lateralward to their exit, mingle with the entering sensory fibers of the glosso-palatine in the sheath of the facial and, through the branches of the glosso-palatine, pass to terminate in sympathetic ganglia of the head, large and small. These gangfia send axones which terminate in the smooth muscle of vessels and about the cells of the glands of the lingual and palatine mucous membrane and of the salivary glands proper. Some of the motor fibers of the nerve terminate in contact with the sympathetic cells remaining in the geniculate ganglion and which give rise to sympathetic fibers issuing from it. Most of the motor fibers pass into the great superficial petrosal nerve and the chorda tympani to terminate in (chiefly) or pass through the spheno-palatine and submaxillary ganglia respectively. Some may pass by the geniculo-tympanic branch and tympanic plexus to end in the otic ganghon. Many no doubt end in the smafler ganglia involved in the various sympathetic plexuses. It is suggested that the motor part carries secretory impulses destined chiefly for the sub-maxillary and sublingual glands. A small gangliated plexus on the capsule of the medial side of the parotid gland has been frequently dissected and found to communicate freely with twigs from the facial nerve and twigs concerned with the trigeminus. It is possible that some glosso-palatine visceral motor fibers terminate in these ganglia for secretory impulses to the parotid gland as well.

Aside from its two or three small collateral twigs of communication, the fibers of the glosso-palatine course in two main branches or nerves:

In the internal auditory meatus, the glosso-palatine gives two delicate collaterals to the vestibular nerve, and some filaments (visceral motor probably) are described as given to the auditory artery and to the temporal bone.

A small geniculo-tympanic branch is given, in the facial canal, from the geniculate ganglion to the small superficial petrosal nerve. This is probably aU visceral motor and sympathetic fibers.

There may occur a twig arising from or near the beginning of the chorda tympani and forming a cormnunication with the auricular branch of the vagus. 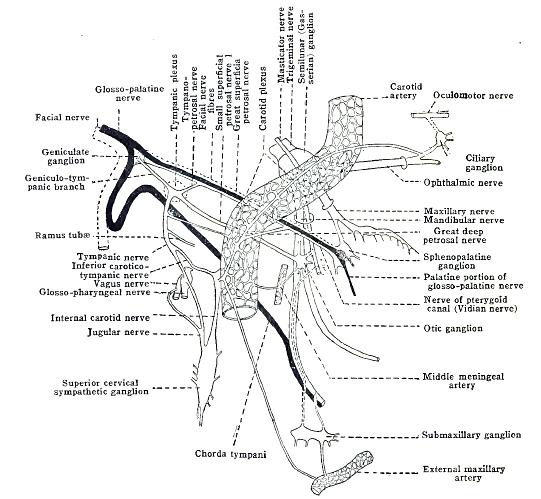 Diagram of the Glosso-palatine Nerve (Black) and the Relations of the Gangliated Cephalic Plexus to the Cranial Nerves. (After Bean.) Broken lines, motor; continuous lines, sympathetic; glosso-palatine in solid black. Medial view. Left side.

A large part of the great superficial petrosal nerve is formed of glosso-palatine fibers. This nerve is further described below in its relation to the spheno-palatine ganglion. It arises from the anterior angle of the geniculate ganglion, enters the middle fossa of the cranium through

A large part of the great superficial petrosal nerve is formed of glosso-palatine fibers. This nerve is further described below in its relation to the spheno-palatine ganglion. It arises from the anterior angle of the geniculate ganglion, enters the middle fossa of the cranium through

the hiatus Fallopii, and passes beneath the semilunar ganglion into the foramen lacerum, where it joins with the great deep petrosal nerve to form the Vidian nerve. Thence the glosso-palatine portion passes over or through the spheno-palatine ganglion to form the greater part of the small and middle palatine nerves which are distributed to the epithelium and glands of the soft palate, some of the sensory fibers probably terminating in the taste organs found there; the remainder serving as fibers of general sensibility. It is probable that most of the motor glosso-palatine fibers in the great superficial petrosal nerve terminate in the spheno-palatine ganglion; some may pass to the carotid plexus and to smaU gangUa elsewhere.

The chorda tympani consists to a very large extent of sensory fibers (peripheral processes of the cells of the geniculate ganglion), but it also contains motor fibers and is thus also a mixed nerve. It leaves the trunk of the facial nerve a short distance above the stylo-mastoid foramen, and pursues a slightly recurrent course upward and forward in the canaliculus chorda tympani (iter chordae posterius), a minute canal in the posterior wall of the tympanic cavity, and it enters that cavity close to the posterior border of the membrana tympani. It crosses the cavity, running on the medial surface of the tympanic membrane at the junction of its upper and middle thirds, covered by the mucous membrane lining the tympanic cavity, and passes to the medial Bide of the manubi-ium of the malleus above the tendon of the tensor tympani. It leaves the tympanic cavity and passes to the base of the skull through a smaU foramen (the iter chordae anterius) at the medial end of the petro-tympanic (Glaserian) fissure. At the base of the skull it inclines downward and forward on the medial side of the spine of the sphenoid, which it frequently grooves, and, on the medial side of the pterygoideus externus, it joins the posterior border of the hngual nerve at an acute angle. Some of its fibers (motor chiefly) leave the lingual nerve and pass to the sub-maxillary ganglion, and others (sensory) continue forward to the tongue, where, in company with fibers of the lingual nerve, they terminate in the epithehum covering the anterior two-thirds of the tongue. Some probably serve to convey sensations of taste, most of them are fibers of general sensibility. Before it joins the lingual nerve the chorda tympani receives a communicating twig from the otic ganglion.