The vestibular nerve is purely sensory. With the peripheral processes of its cells of origin terminating in the neuro-epithelium of the semicircular canals and the vestibule, and their central processes conveying impulses which are distributed to the gray substance of the cerebellum and spinal cord, the nerve comprises a most important part of the apparatus for the equilibration of the body.

It has been customary to describe the vestibular [radix vestibularis] and the coch- lear [radix cochlearis] nerves combined as the acoustic (auditory) or eighth cranial nerve. While the two are blended in a common sheath from near the medulla to the bottom of the internal auditory meatus, they are likewise partty enclosed in the same sheath with the facial and glosso-palatine nerves and the internal audi- tory artery which accompany them in this meatus. At the bottom of the meatus the vestibular and the cochlear are separate; they are separate at their entrance into the lateral aspect of the medulla oblongata; and their central connections, peripheral distributions and functions are different. 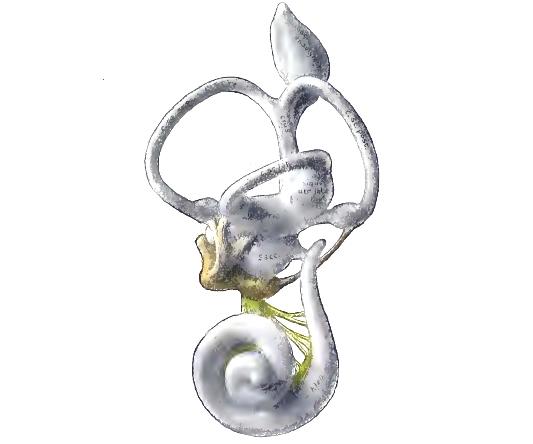 The peripheral processes of the cells of the vestibular ganglion terminate in the specialised or neuro-epithelium comprising the maculm in the sacculus and the utriculus and the cristce in the ampullte of the three semicircular canals. Thus there are five terminal branches of the nerve. None of its fibers terminates in the cochlea. The vestibular ganglion has a lobar form, one lobe giving rise to a superior utriculo-ampuUar division which divides into three terminal branches; the other giving a sacculo-ampuUar division which gives two terminals.

The superior or utriculo-ampullar branch divides into the following terminal branches:

The inferior or saccule-ampullar branch accompanies the cochlear nerve a short distance further than the superior, and divides into

The large nucleus of termination of the vestibular nerve, spread through the area acustica in the floor of the fourth ventricle, and divided into four sub-nuclei, is associated with the nuclei fastigii, globosus, and emboliformis of the cerebellum, with the nuclei of the eye-moving nerves, with the spinal cord, and probably with the cerebral cortex.