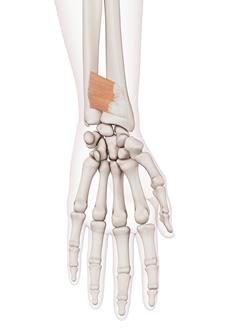 The pronator quadratus muscle is a thin quadrilateral sheet, named from itj action and its nearly square shape.

The inner part of the front surface of the lower fourth of the ulna.

The lower two inches or rather less of the outer border, the anterio: and the inner surfaces of the radius. The pronator quadratus and deep view of the palm.

The greater part of the muscle consists of fleshy fibres whict pass transversely between its two attachments. Its inner third, however, ii covered by a strong aponeurosis which arises from the inner border of the ulna The radial insertion is of a somewhat triangular shape, the outer side of the triangl; passing obliquely from the interosseous line downwards and joining the oute border of the radius a short distance from the base of the styloid process; while thj inner side corresponds to the interosseous ridge and the base crosses the front c] the radius above the attachment of the anterior radio -carpal ligament.

From the outer and inner cords of the brachial plexus (throug the eighth cervical and first thoracic nerves) by means of the anterior interosseou branch of the median nerve which terminates by filaments which enter the fror of the muscle near its upper border. I

Superficially, the flexor longus pollicis, the flexor carpi radiah' the flexor profundus digitorum and the flexor carpi ulnaris, the radial and ulns: arteries and the ulnar nerve; deeply, the anterior interosseous artery, the inte' osseous membrane and the inferior radio-ulnar joint.

The pronator quadratus is sometimes absent. It sometimes gives (j shps to the scaphoid or trapezium, the base of the first metacarr)al bone, or to the origii; of the short thumb muscles.